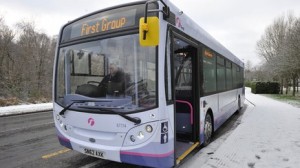 FirstGroup Plc., one of the largest transport operators in both the U.K. and North America, did not wait for a minute longer before striking back after one of its shareholders called for the company to sell its business in the U.S.

Sandell Asset Management, a hedge fund with a stake estimated to about 3%, have asked the London-based company to consider selling Greyhound, a trans-American bus service, and part of the school bus and transit division of the company.

The disruption between the London-based transport operator and the Top 10 shareholder, which threatened to cool the relations between the two, happened after Sandell expressed its opinion that such a sale would offload the U.S. business and will help the company to pay its debt down. In addition, the investor also said it truly believed that such a separation would have been quite beneficial for FirstGroup’s share price.

However, the transport company does not seem willing to comply with Sandell’s suggestion. It made a statement, saying: “The group has engaged with Sandell several times, reviewed their proposal in detail and believes that it is not compelling and contains a number of structural flows and inaccuracies. Consequently, we remain focused on the vigorous execution of our strategy.”

FirstGroup Plc. is executing a three-to-four-year plan to turn around its bus operations in the U.S. and the U.K. The company has also managed to minimize its costs in the U.S. with 100 million dollars, and in the U.K. it has sold several London-based operations and depots. The attention of FirstGroup Plc. is now attracted by the areas of Glasgow, Sheffield and Leeds, and the company is doing its best in order to win new customers there. It has also reported its first profit by the bus passenger services between April and September this year.

The company promised to provide more information concerning its plans at a capital markets day in January. FirstGroup Plc. also announced that it does not find it necessary to sell some assets in order to pay down its debt, because the capital of the company has been raised. The transport provider also confessed that at the time of the cash call it had been considering the possibility of selling or separating some of its U.S. operations, but no such actions were going to be undertaken at the time being.