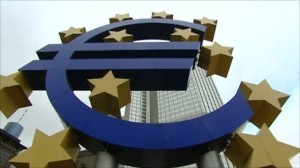 Having hit a 5-week high on Thursday, today the euro traded little changed against the US dollar.

The German Economy Ministry reported that the nations factory orders declined more than initially anticipated in October. Factory orders, adjusted for seasonal swings and inflation fell by 2.2% compared to September, when they increased by an upwardly revised 3.1%. Analysts projections pointed to a 1% decline. Foreign orders fell 2.3 percent in October, while those from within the country dropped 2 percent, today’s report showed. However, orders advanced 1.9% from a year ago, after adjustments for the number of working days.

Ben May, European economist at Capital Economics Ltd. in London, said before the ECB report, cited by Bloomberg: “Over the coming months you are unlikely to see a dramatic acceleration in the industrial sector in Germany or in the euro zone,” . “In that sense, we don’t expect it to give a major boost to the economy.”

On Thursday, the ECB Governor Mario Draghi, said that ECB’s policy will remain accommodative as long as it is needed and that benchmark interest rates will probably either remain at the current levels, or will be even lowered for an extended period of time.

The Euro zones struggle to sustain a recovery from its longest recession, slowed German economic expansion. The ECB Governor clarified that the Euro zone may experience a continuous period of low inflation, before the rate moves upwards to reach the 2% target. He also added that the bank expects the economy in the Euro zone, which is the largest German trading partner may shrink 0.4% this year, before expanding to an upwardly revised 1.1%.

The comments came after a widely expected move of the ECB to keep its benchmark interest rate at 0.25%.

ECB Governors comments helped the 17-nation common currency to advance against the US dollar to the highest, since October 31st.

Meanwhile, yesterday US revealed much-better-than-expected economic data. The US Commerce Department reported the nation’s revised Gross Domestic Product grew at a 3.6% annualized rate in the third quarter, up from the initial estimate of 2.8% and the strongest since Q1 of 2012, beating analysts’ projections for a 3.1% expansion. According to the report, US growth was mainly driven by the largest increase in inventories since early 1998. Inventories increased at a $116.5 billion annualized pace in Q3, compared to $86 billion rate the preceding quarter.

A separate report, provided by the Labor Department, showed that the number of people who filed for initial unemployment benefits sharply dropped in the week ended November 30th. Initial Jobless Claims declined to 298 000 last week, compared to an upward revision of 321 000 claims in the preceding week, confounding analysts’ expectations for a jump to 325 000.

Yesterday’s jobless claims, coupled with better-than-expected employment data on Wednesday, fueled speculations we might get upbeat readings today when the Labor Department will release November’s keenly awaited non-farm payrolls and unemployment rate. Automatic Data Processing Inc. reported on Wednesday that U.S. private employers added 215 000 jobs last month, the biggest increase in a year, confounding analysts projections for a decline to 170 000. October’s reading received an upward revision to 184 000 from initially estimated at 130 000, suggesting the US economy fared better than economists thought in October.

Today’s reports may show that US employers added 180 000 jobs in November, while the unemployment rate slid back to a five-year low of 7.2%. If confirmed, this would further boost demand prospects, but gains are expected to remain limited as the readings would also reinforce speculations for an earlier-than-expected tapering of Fed’s monetary stimulus.