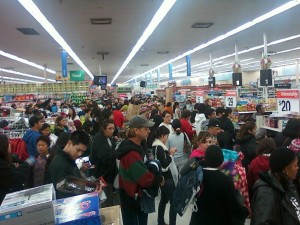 Wal-mart Stores Inc. and other large retailers such as Target, Sears, Macys reported strong Thanksgiving Day and Black Friday traffic in stores and online, which would most likely extend during the weekend, adding that shoppers were focused on “pricey” electronic products.

Without providing further details retailers concluded that their decisions to open earlier on the holiday were successful. Wal-Mart and Target were among a number of retailers that opened on Thanksgiving Day, at 6 p.m. and 8 p.m., respectively, in an effort to attract more customers and to keep up with online retailers. Wal-Mart said it recorded more than 10 million register transactions between 6 p.m. and 10 p.m. Thursday in its stores and nearly 400 million page views that day on walmart.com. Target said sales were among the highest it had seen in a single day online.

Wal-Mart reported its electronics, such as big screen TVs, iPad minis and new game systems Xbox One and PS4, were among the top sellers.

Despite big linesin front of stores, there was early evidence that many stayed home to shop deals online. By 6 p.m. Thursday, Thanksgiving online sales were up 10% this year over the same period last year, according to IBM Digital Analytics Benchmark, which tracks transactions at 800 U.S. retail sites.

However, among potentially rising sales and excitement surrounding holiday shopping week, labor protests were intensifying. The brave Walmart workers, whove been putting their jobs on the line and getting arrested for over a year to demand an end to illegal retaliation for speaking out, full-time work for those who want it, and a living wage, are hoping to make a difference on Black Friday – the busiest shopping day of the year in the US – by striking, protesting, and holding rallies at 1,500 stores across the country. In addition to major cities like Los Angeles, Chicago, Miami, and Philadelphia, actions are also planned in Granbury, Texas, Pine Bluff, Arkansas, Elk City, Oklahoma.

The average worker makes $8.81 an hour or $17,000 a year, forcing many to rely on public assistance programs to make ends meet. All they are asking for is $25,000 a year and the chance to work full-time. Walmart CEO Michael Dukes annual $35 million salary gives him more in an hour than a full-time employee makes in a year. Because they are not unionized, many are paying a heavy price for speaking out. According to OURWalmart , 80 employees have been fired for engaging in civil disobedience.