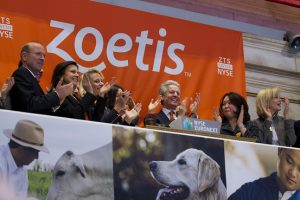 Zoetis, the largest animal health company, became public in February, which resulted in to a close monitoring on the company carried out by some big investors interested in the animal health industry. This automatically means that Zoetis was forced to prove that it is a stable and independent enough to exist on its own without being an integral part of Pfitzers vet division.

We can all be thankful to Zoetis for enlightening us a bit more on the questions that concern the business, because there undoubtedly are some crucial investment factors that need to be taken under consideration before making the decision of buying this stock.

trying to grow the brand

There is absolutely no doubt about the fact that revenue is one of the most imposing features of Zoetis Q3 income statement. After all, 8% up compared with the revenue they had the same time just one year ago, is more than impressive result. Zoetis Livestock segment brought the company 706 million dollars of the 1.1 billion revenue, and the remaining part, which equals 397 million dollars is brought by the Companion Animal division.

This is why we are obliged to admit that a company, which is able to boost its quarterly revenue by 8% on its first year as a public company is without any doubt quite promising and independent one. However, the surprises do not stop here.

Zoetis also managed to make a few small but promising steps in the direction of growing its brand by releasing some new products and making some strategic acquisitions, including acquiring all assets of Advanced Food Technologies.

Of course, we are also obliged to note that all this success also had its negative consequences. During the last quarter, the Zoetis net profit dropped with 19%, but this is quite understandable taking into account the investments made by the company in research and building marketing strategies.

At this moment, Zoetis looks quite confident in its own skills. The steps it makes in the direction of growing its brand may be rather small, but they come here to prove the company is willing to become one of the most competitive ones on the vast pharma market. Of course, no one can say for sure how long this trends will last. Only the future will tell what is going to happen, but Zoetis undoubtedly could become one of the best choices of the health care investor and make great profit.