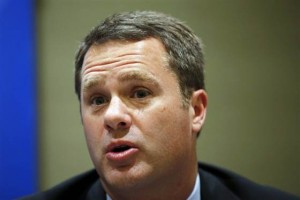 Wal-Mart Stores Inc. appointed Doug McMillon, the head of its international business, to replace Mike Duke as chief executive officer when he retires as the world’s largest retailer has to solve issues of struggling home and international growth.

Mr McMillons raise comes as the group tries to reverse falling sales in the US and fix its businesses in China and Brazil while waiting for the results of probes into alleged bribery in Mexico. The new CEO is known as a favorite of the children of Walmart’s late founder and is closer friend to the family, which owns about 50% of the company. Though, his elevation was not a surprise it came sooner than many analysts had expected. McMillon, who first worked in a warehouse at Wal-Mart as a summer employee in 1984, has almost 25 years of experience at the firm.

“The biggest challenge is the US domestic economy, how to turn the traffic trends positive and to remain relevant,” Ian Gordon, an analyst for Standard & Poor’s in New York, said in a telephone interview for Businessweek. “Competing in the e-commerce world will be important and keeping their eyes on the rise of the dollar stores.”

The current CEO Mr Duke, will step down on January 31 after four years. In his previous job he was in charge of Walmart’s non-US business for part of the time when it allegedly paid bribes in Mexico to get permits for new stores. Wal-Mart’s shares added 69% from the last trading day before Duke became CEO, through Nov. 22 this year. The Standard & Poor’s 500 Index more than doubled in that time. Wal-Mart rose 0.8% to $80.43 at the close in New York yesterday.

“A merchant at heart, Doug has both a long history with our company and a keen sense of where our customers globally are heading next,” said Walton in a statement.

Fierce competition has pushed the worlds largest retailer to flat growth this year as companies such as Amazon is grabbing market share as more customers are willing to make online purchases using their mobile devices.

Rob Walton, chairman of Walmart’s board and son of its founder, stays positive saying: “The company has the right strategy to serve the changing customer around the world, and Doug has been actively involved in this process.”

The 22 analysts polled by CNN Money offering 12-month price forecasts for Wal-Mart Stores Inc have a median target of 83.00, with a high estimate of 90.00 and a low estimate of 75.00. The median estimate represents a 3.20% increase from the last price of 80.43. The current consensus among investment analysts is to hold stock in Wal-Mart Stores Inc. Company rose more than 17% on a year-to-date basis.