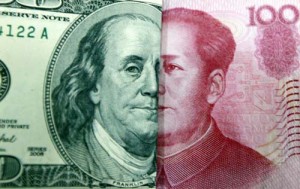 The USD/CNY traded unchanged, although air tension rises in the Chinese-Japanese conflict area.

The spot rate for the yuan traded in Shanghai was steady at 6.0927, according to China Foreign Exchange Trade System. Support was likely to be received at November 20th low, 6.0916, while resistance was to be encountered at November 21st high, 6.1300.

On November 23rd, China announced an air defense identification zone in East China Sea and threatened to take military defensive emergency measures if an aircraft enters the zone. The conflict zone consists of few islands, whose ownership is disputed by both Japan and China. U.S. Army Colonel Steve Warren, cited by Bloomberg, said yesterday that U.S. pilots wont comply with the Chinese order.

Recently, the Peoples Bank of China (PBOC) reduced its main interest rate by 0.02 percent. The onshore yuan is allowed to fluctuate by only 1% on either side of the daily fixing. Today, the PBOC Governor Zhou Xiaochuan, according to Market News International, cited by Bloomberg, made comments in Beijing that China will widen its yuan trading band in an orderly way and will improve its exchange rate mechanism.

Meanwhile, the Federal Reserve might be tapering its quantitative easing (QE) program earlier than expected. The Federal Reserve revealed last week, that it might be trimming the record-high stimulus “in the coming months”, if the economic recovery starts moving in the right direction. Fed minutes showed that policy makers “generally expected that the data would prove consistent with the committee’s outlook for ongoing improvement in labor market conditions and would thus warrant trimming the pace of purchases in coming months.”

Later today, market players are also awaiting the release of a string of important US indicators, such as the number of building permits and the number of housing starts for September and October. More importantly, markets are awaiting the announcement of the US consumer confidence survey results for November, as the corresponding index probably reached a reading of 72.1, compared to 71.2 in October.