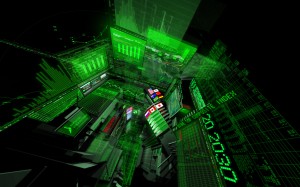 U.S. stocks retreated, with the Dow Jones Industrial Average falling from a record, as companies earnings and an improving economy fueled speculation the Federal Reserve will reduce stimulus next month.

Federal Reserve Bank of Atlanta President Dennis Lockhart, said in an interview on Bloomberg Radio that the Fed could reduce, or taper, the pace of its $85-billion-a-month bond-buying program in December. “I dont think the circumstances rule out a consideration in December,” he said. But later, during another speech given in Montgomery, Alabama, Mr. Lockhart said, “monetary policy overall should remain very accommodative for quite some time.”

Investors will focus on economic reports this week on jobless-benefit claims and manufacturing in the New York area. Data last week showed the U.S. economy grew faster than forecast in the third quarter and hiring rose more than estimated in October.

News Corp. fell 1.6% to $17.15 as the publisher reported a 2.8% decline in first-quarter revenue, hurt by shrinking demand for print advertising. The news division, which owns papers in the U.S., the U.K. and Australia, saw revenue fall 10% to $1.5 billion mainly due to its Australian segment.

Dish Network added 6%, to 50.35, after the company reported a better-than-expected third-quarter profit, boosted by higher revenue and subscriber rolls.

US Airways Group Inc. added 1.1% to $23.52. The carrier and American Airlines reached an agreement with the U.S. Justice Department over the government’s bid to block their merger, clearing the way to a tie-up that would create the world’s biggest carrier.

Xerox Corp. surged 4% to $10.69 for its largest increase in a month. The printer and photocopier giant predicted that 2014 earnings may grow more than analysts estimate, as business services account for a bigger chunk of its revenue.