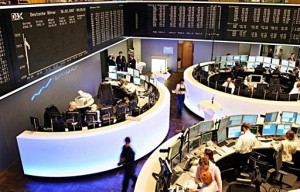 European stocks retreated on Friday, halting a week of gains, as Royal Bank of Scotland Group Plc and Renault SA fell, while investors were inspecting the U.S. manufacturing data to find signs for the outlook for the Federal Reserve’s stimulus program.

In the U.S., the ISM manufacturing index climbed to 56.4 last month from September’s 56.2. Numbers above 50 indicate expansion. Economists had projected a drop to 55. The report follows data from China, where the official manufacturing gauge rose more than forecast to an 18-month high.

In corporate news, Royal Bank of Scotland sank 7.5%, its biggest retreat since June 2012. Britain’s biggest publicly owned bank said it will write down as much as 4.5 billion pounds ($7.2 billion) in the fourth quarter after transferring 38.3 billion pounds of its riskiest loans to an internal bad bank. RBS also posted a net loss of 828 million pounds in the third quarter.

Renault dropped 5% to 61.29 euros. Nissan lowered its full-year profit forecast by 15%. Japan’s second-biggest car-maker expects to post net income of 355 billion yen ($3.6 billion) in the year ending March, compared with its previous estimate of 420 billion yen and the average projection of 440.3 billion yen in a Bloomberg survey.