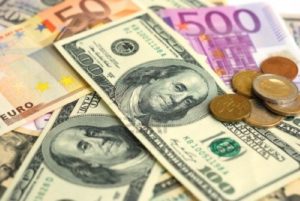 The euro distanced from session lows against the US dollar on Monday, following a report, which showed pending home sales in the United States fell more in September compared to the drop in August, reaching the lowest level since December 2012.

Earlier on Monday it became clear that industrial production in the United States demonstrated a certain improvement in September, supported by the volatile sector of utility services, which has compensated the weaker rate of increase in manufacturing. Industrial output rose 0.6% in September on a monthly basis, exceeding preliminary estimates of a 0.4% gain, after production climbed 0.4% in August. Capacity utilization rate increased 0.4% to reach 78.3% in September, again beating expectations of a rate of 78.0%. Septembers industrial output figure almost matched levels recorded in 2007, something unseen since the beginning of recession. Manufacturing output, a major component of the overall industrial production, increased by a mere 0.1% in September compared with a month ago, when it climbed 0.5%. Utility services registered a 4.4% gain in September, following five months of contraction.

At the same time, pending home sales in the United States decreased considerably in September, falling for a fourth consecutive month, as potential buyers preferred not to conclude a deal due to higher mortgage rates and the uncertainty, caused by the fiscal standoff in Washington. The National Association of Realtors (NAR) said that the index of pending home sales fell 5.6% in September to reach a value of 101.6, the least since December 2012. In August compared to July sales decreased 1.6%. During September 2013 compared to September 2012 the drop was 1.2%, or the first annual decline in two years. Analysts had projected that the index will show a 0.5% advance. NAR suggested that these results were influenced the most by rising home-purchasing costs as well as the experienced budget crisis in the country, which caused a negative impact upon consumer confidence.

Meanwhile, market players remained wary before Federal Reserve Bank policymakers meet on October 29th-30th. Experts project that bank’s officials will abstain from trimming the monthly pace of the monetary stimulus this month and wait until March 18th-19th. According to projections the quantitative easing may be pared to 70 billion USD per month from the current 85 billion USD per month.