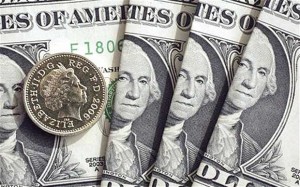 British pound continued trading lower against the US dollar on Wednesday, as traders secured their profits after yesterdays rally, while the minutes of Bank of Englands (BoE) policy meeting in October said that unemployment rate in the United Kingdom was decreasing at a faster pace than anticipated.

According to the BoE minutes, released earlier today, there may be a chance of raising the benchmark interest rate sooner than it was expected in August. The minutes said the all nine members of the Monetary Policy Committee (MPC) at the central bank agreed on the statement that the rate of unemployment in the country was dropping at a faster pace than projected. The Committee has pledged in August that it will follow a policy stressing on low interest rates until unemployment falls below 7%. Back then, it was expected that such a level will be achieved no sooner than 2016. The most recent report on UK unemployment, however, spurred expectations that monetary policy might be tightened sooner than initially anticipated. The unemployment rate declined to 7.7% from 7.8%.

The minutes also revealed that MPC members voted unanimously in favor of retaining the base interest rate at the current level of 0.50% and the size of monetary stimulus at 375 billion GBP.

“Market rates had fallen back over the month and output appeared to be expanding at least as fast as expected” in August, the Bank of England said in the minutes. “All members therefore agreed that there was currently little case for increasing the degree of monetary stimulus further.”

The yield on UK benchmark 10-year gilts decreased four basis points, or 0.04 percentage point, to reach 2.60% today, after having fallen to 2.59%, or the lowest level since August 27th, Bloomberg imparted.

At the same time, the British Bankers Association (BBA) said that the number of loans for house purchases in the UK increased more than projected in September, reaching 42 990 instead of 39 500, while in August the number of loans has been revised up to 38 834 from 38 228 previously.

Meanwhile, the sterling was lower against the euro, with EUR/GBP cross advancing 0.37% on a daily basis to trade at 0.8521 at 9:43 GMT. GBP/JPY pair was plunging 1.36% to trade at 157.21 at 9:46 GMT. All in all, the pound has risen 4.5% during the past six months, or the best performing currency among the 10 developed-nation currencies, which are tracked by Bloomberg Correlation-Weighted Indexes. The euro has gained 4.2%, while the US dollar has depreciated 2.1%.