Since Qatar won the bid in 2010 to host the FIFA 2022 World Cup, the country has been busy preparing for the prestigious event that is set to kick off on November 20. The World Cup, which will see 32 national teams compete, starting with a match between Qatar and Ecuador, will attract some 1.5 million visitors to the tiny desert country.

The tournament is expected to bring $4.5 billion in revenue (for FIFA), which, however, is dwarfed by the estimated investment of $220 billion Qatar has had to make to prepare for the World Cup. This includes the construction of seven new stadiums and the renovation of another one as well as the building of roads, hotels, a metro system and other infrastructure necessary to accommodate such a huge amount of visitors to a country which is practically a desert. It is unclear how much Qatar itself will profit from hosting the event – or indeed if it will make a profit at all. This puzzling situation provoked TradingPedia to examine the country’s massive investment more closely, and to investigate just how much oil the Qatari will need to sell to cover their expenditure.

Our calculations show that the country will need to sell approximately 3 billion barrels of crude oil. After being refined and converted into various types of fuel, this oil will eventually be burned, and emit nearly 928 million tons of carbon dioxide. 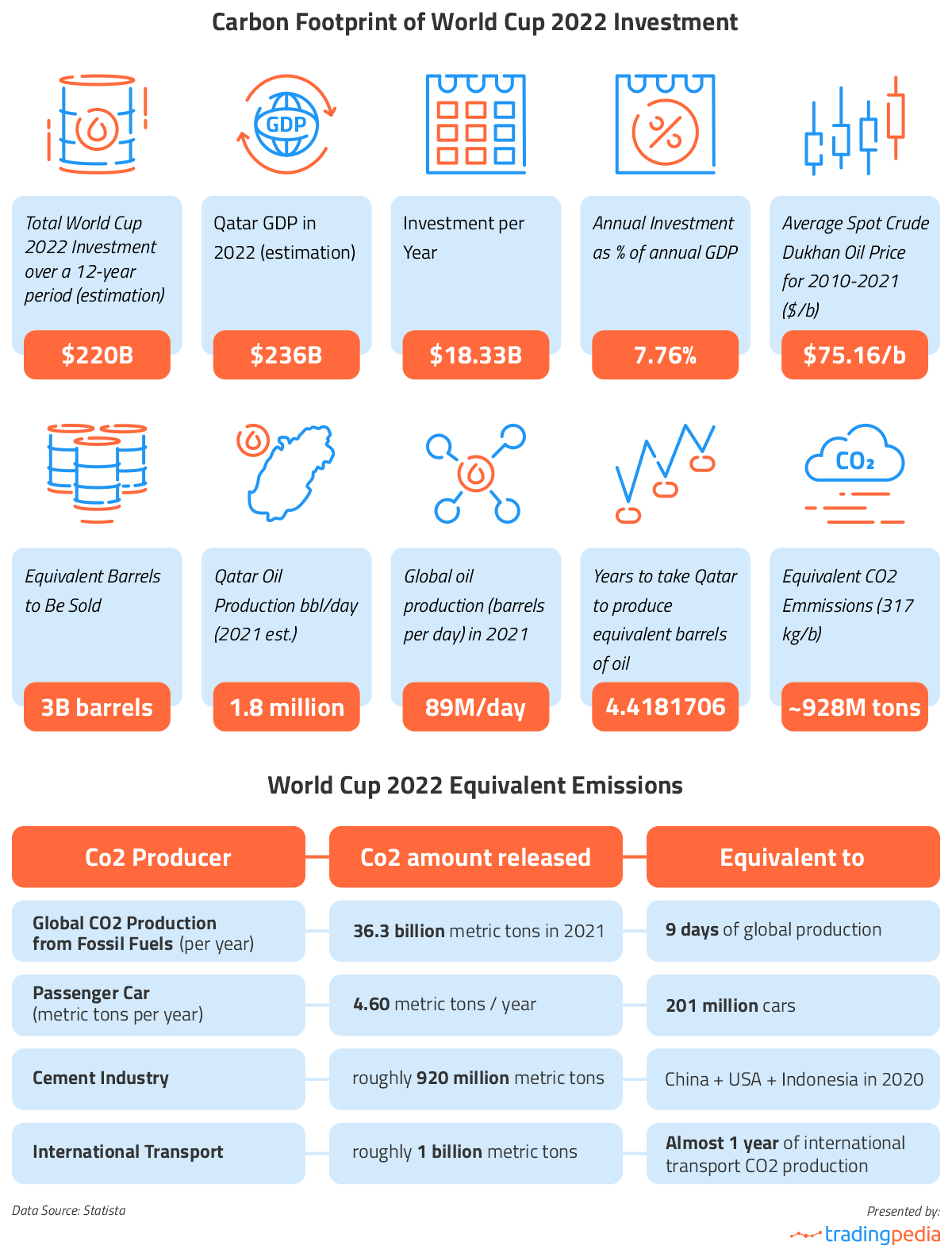 World Cup 2022 Economics: Who Pays for What

According to FIFA, the organization will cover all operating costs associated with the hosting of the World Cup, including $440 million in prize money. This is an increase of $40 million on the previous tournament held in Russia in 2018, and up $82 million from the prize money that was allocated for the 2014 World Cup in Brazil. This year, the winning team will receive $42 million, while the runner-up will get $30 million. The prizes for the third and fourth places are $27 million and $25 million, respectively.

Those who finish in 5th to 8th place will get $17 million each, teams ending in 9th to 16th place will receive $13 million, while those who don’t make it out of the group stage will receive $9 million. FIFA has also made payments of $1.5 million covering preparation costs, guaranteeing that every participating country will return home with at least $10.5 million. Along with the $440 million in prize money, there are two additional types of payments FIFA will offer – a club benefit program ($310 million) as well as club protection and insurance fees ($220 million). The organization will also pay $500 million in administration costs, roughly $520 million for TV coverage production costs, around $450 million to help organize the tournament, and another $180 million awarded to the Qatar Football Association. 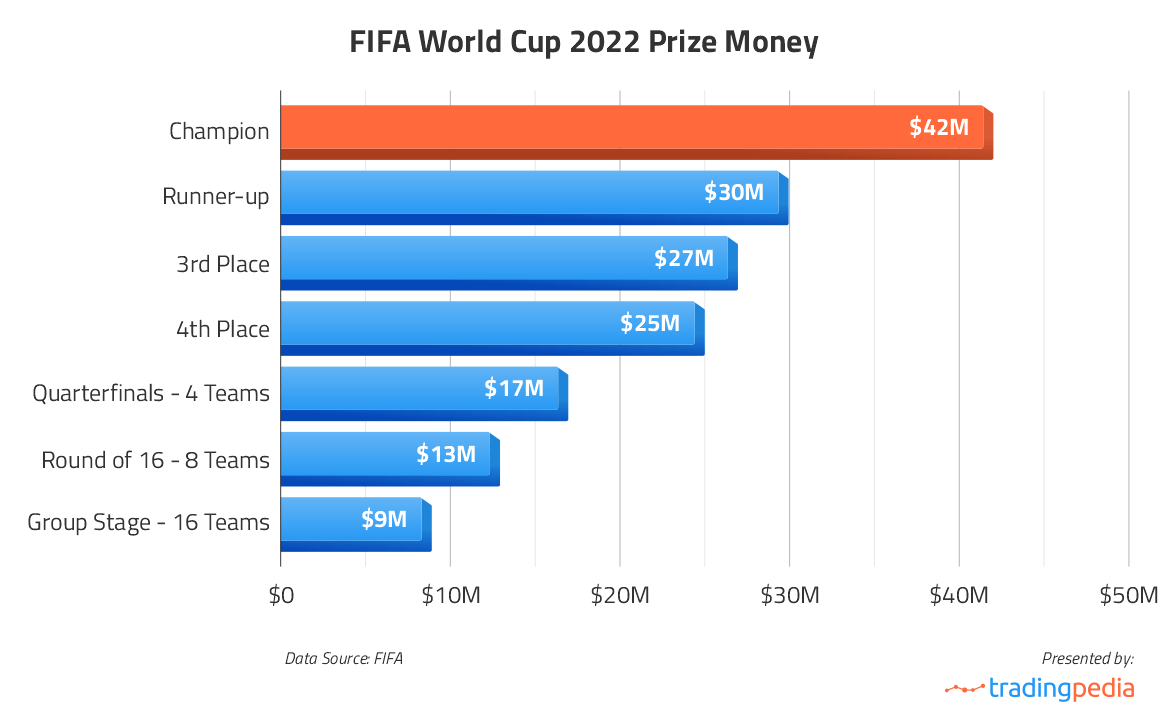 To sum it all up, the operating costs are estimated at around $1.7 billion. On the other hand, the total revenue FIFA is expected to earn is $7.2 billion (a very rough estimate) – a minimum of $3 billion from TV and media rights sales, up to $2.2 billion in sponsorship and other commercial activities, $1.1 million from ticket sales and hospitality packages, as well as $890 million from licensing fees. Taking into account the total prize fund (around $1 billion) and the $1.7 billion in operating costs, the organization’s profits are expected to reach between $3 billion and $4.5 billion.

Qatar will also have a lot of expenses associated with the hosting of the tournament – at least $1 billion for security, as well as various other operating costs, including stadium maintenance, salaries, and many others. Of course, the biggest expense here is the initial investment the country had to make in order to provide the stadiums where the matches will take place, not to mention the roads and other transit systems required to transport people to and from the stadiums, the sports centers where the teams can train, the additional hotels, restaurants and so forth.

The World Cup matches will be played in 8 stadiums across five cities. The infrastructure that has been built over the past decade has to accommodate around 1.5 million visitors over the course of approximately one month. The cost of the total investment has varied over the years, as Qatari officials have offered different figures for everything from the stadium construction to the development of even more expensive projects.
According to Fatma Al Nuaimi, the Communications Executive Director at the Supreme Committee for Delivery & Legacy of the World Cup, the cost for the 8 stadiums was $6.5 billion. However, back in 2016, Supreme Committee for Delivery and Legacy secretary general Hassan Al Thawadi said construction costs would amount to between $8 billion and $10 billion. He also put the total amount invested in wider infrastructure at $200 billion.

That includes Lusail City, a 38-square-kilometer coastal city some 20 km north of Doha, which was built specifically for the tournament. Construction work on the $45-billion project started in 2006, and according to Qatari officials it is almost complete. It boasts hotels, residential complexes, office buildings, marinas, golf courses, a theme park and a Formula One race track. It is also home to the Lusail Iconic Stadium, which will host the World Cup final. The stadium’s reported cost is $767 million and it has a capacity of 80,000 people.

Another ambitious project is The Pearl, an artificial island near Doha, which was first announced in 2004. While its initial cost was $2.5 billion, it is now estimated that the true investment is around $15 billion. Even more expensive is the Doha Metro, a surface-based rapid transit system that has 3 lines and 37 stations. The metro is still being built, but it already has 76 km of operational track leading to Lusail City and Hamad International Airport, as well as other locations.

In fact, not all new projects in Qatar are directly linked to the hosting of the 2022 World Cup. According to officials, many of the new developments have been planned as part of the Qatar National Vision 2030, an ambitious plan that aims to “transform Qatar into an advanced society capable of achieving sustainable development” by 2030. However, very few – if any – of the aforementioned projects would have been completed by now if it wasn’t for the World Cup. In fact, several would not even have been initiated by 2022.

Comparing the Numbers: FIFA World Cups in the Past 30 Years

It seems that the 2022 World Cup in Qatar is the most expensive tournament so far. The previous record-breaking FIFA World Cup was in 2018, when Russia was said to have spent some $11.6 billion – mostly on transport infrastructure and the construction and reconstruction of sports facilities. 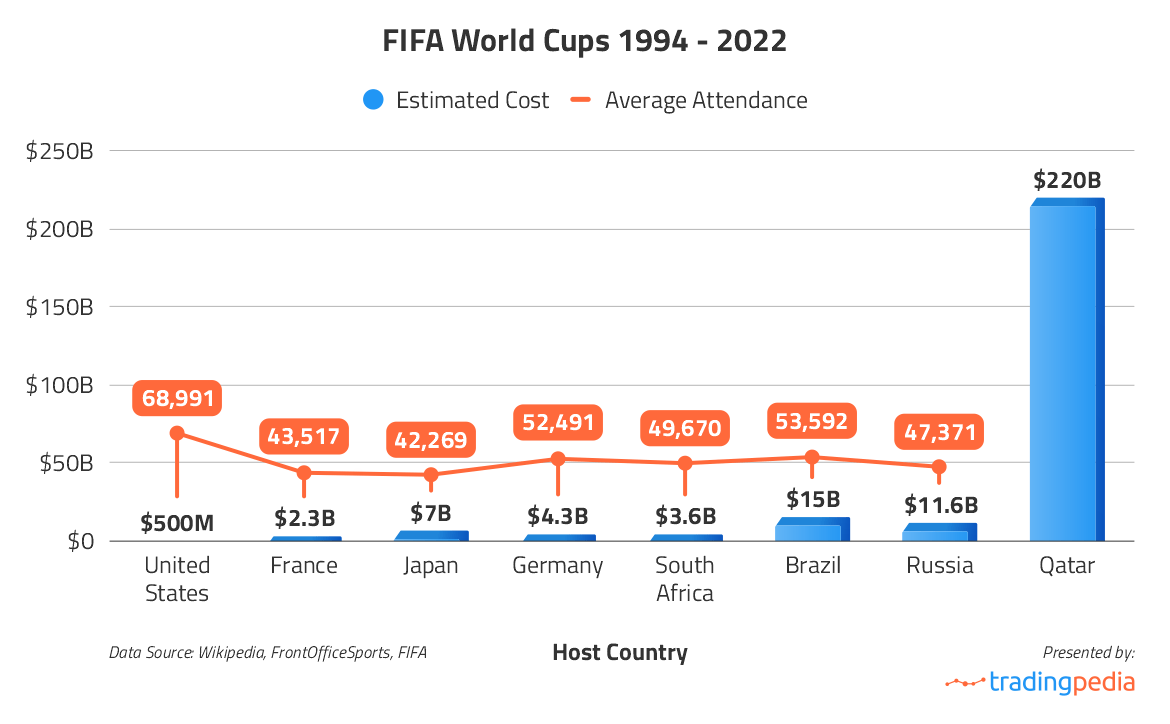 Similarly to its neighboring Gulf States, Qatar has a large supply of oil and natural gas, and most of its revenue comes from exporting these. Until 2019, the country was a member of OPEC, the Organization of Petroleum Exporting Countries. According to official figures published in the Budget of the State of Qatar for the 2021 Fiscal Year, the oil revenue in 2021 amounted to R121.6 billion. At the same time, the total revenue was QR160.1 billion, with non-oil revenues standing at QR38.5 billion. Qatar is also the largest exporter of liquefied natural gas (LNG) in the world. 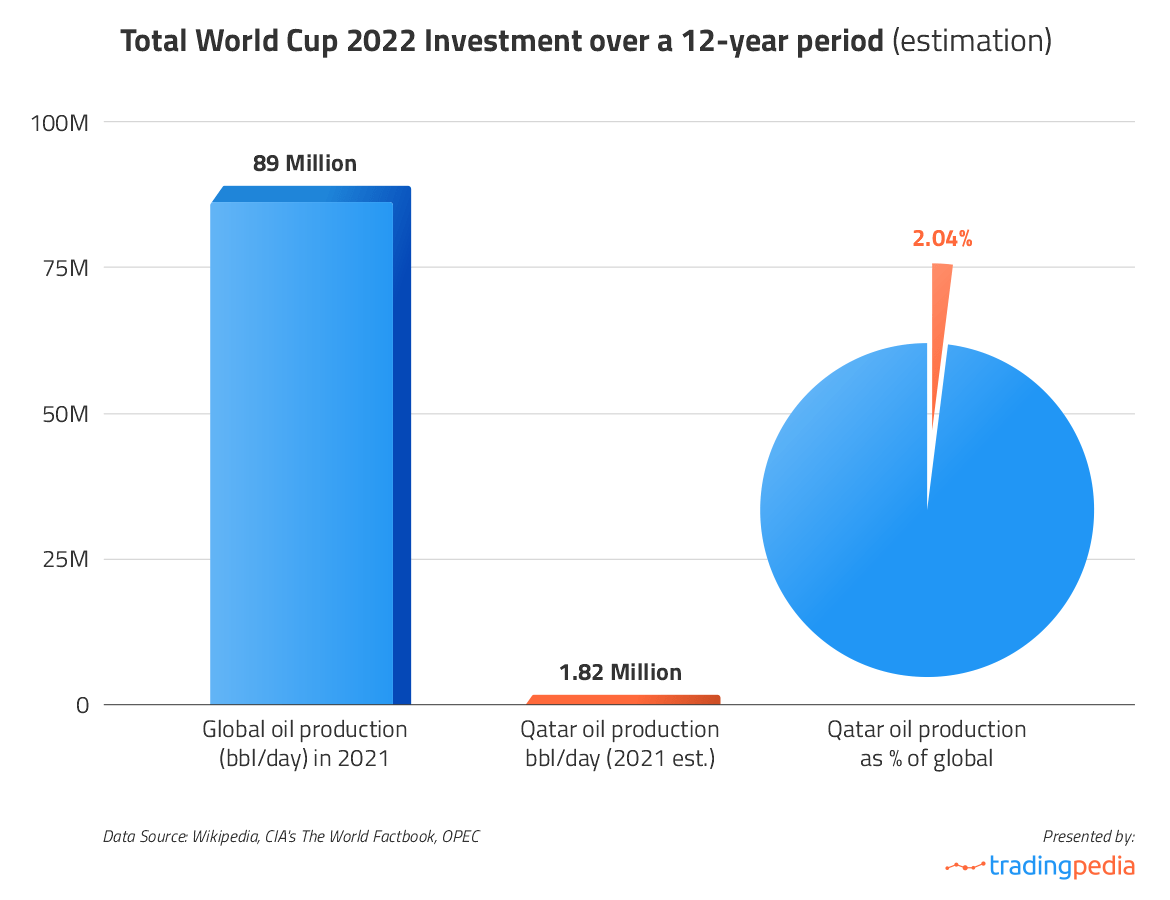 Although the country now seems more focused on producing LNG, it remains financially dependent on its oil. Daily production for 2021 is estimated at 1,815,100 barrels, which is 2.04% of the global production. So, how much oil should Qatar produce every day in order to pay for the World Cup? According to our estimates, based on an average spot crude Dukhan oil price for the 2010 – 2021 period of $75.16/b, it will need to export almost 3 billion barrels of crude oil. If it continues production at the current pace, it will take Qatar a little over 4 years to pay for the tournament in full.

The country’s proven oil reserve is around 25.24 billion barrels, which will probably last for another 38 years. So, to cover the World Cup investment, it will need to pump and export 11.88% of its total oil reserve.

Carbon Footprint of the $220 Billion Investment

What does this mean for the planet? Every barrel of crude oil extracted from fields produces carbon dioxide emissions that contribute to the greenhouse effect, which climate change scientists have been warning about for several decades. There are many different calculations that show the CO2 emissions per barrel, but it is important to note that the process of the extraction of oil, its transport, and the refining are also associated with the creation of greenhouse gasses.

Another crucial point is the fact that crude oil is rarely used directly. Instead, it is refined into a variety of products, including both the fuels we burn and plenty of others where the carbon is never converted into CO2 emissions such as plastics, asphalt, lubricant oils, etc. For this reason, we used the calculation of a barrel of crude oil producing a minimum of 317 kg of atmospheric CO2. It takes into consideration the fact that every barrel of crude includes gasoline, distillate fuel oil, kerosene-type jet fuel, and residual fuel oil, all of which are eventually burned and converted into water vapor and carbon dioxide.

All this means that the $220 billion investment and the 3 billion barrels produced to cover it would be equivalent to the massive amount of at least 928 million metric tons of CO2. This carbon dioxide has been released into the atmosphere and will continue to be released as a greenhouse gas as we burn every single drop of refined fuel. According to NASA, one metric ton of carbon dioxide CO₂ would fill a sphere 9.8 meters in diameter.

In 2021, the world emitted 36.3 billion metric tons of carbon dioxide from burning fossil fuels. The carbon footprint of the 2022 World Cup is equivalent to 9 days of the world’s CO2 production or the amount of CO2 produced annually by international transport. It is also equivalent to the 2020 emissions by the cement industry of China, the US, and Indonesia combined. What about the CO2 from automobiles? Since the typical gasoline-run car emits roughly 4.6 metric tons of CO2 per year, it would take more than 201 million cars one year to release the same amount.