The word democracy (from the Greek “demos”, for “common people”, and “kratos”, for “rule” or “strength”) means “rule by the people” These days, rather than having direct control, we “rule” through elected representatives. While this sounds simple and straightforward, it is anything but – in fact, there are numerous electoral systems around the world, each of them with variations that are being implemented separately or in various combinations.

Creating the structure of elections, voting systems are some of the most fundamental elements of modern representative democracy. Moreover, each electoral system has a different way of translating votes into seats, a vital part of what we often refer to as the “rule of the people”. The voting system can in fact influence how much control we exercise over the political process. These days, this is more important than ever, which is why TradingPedia compared the electoral systems of 79 countries, setting them against voter turnout. It is a good indicator of the effectiveness of a system and the general public’s support for the administration.

We also added the Democracy Index for each country, which measures the state of democracy, based on 60 indicators across five categories – electoral process and pluralism, civil liberties, functioning of government, political participation, and political culture. 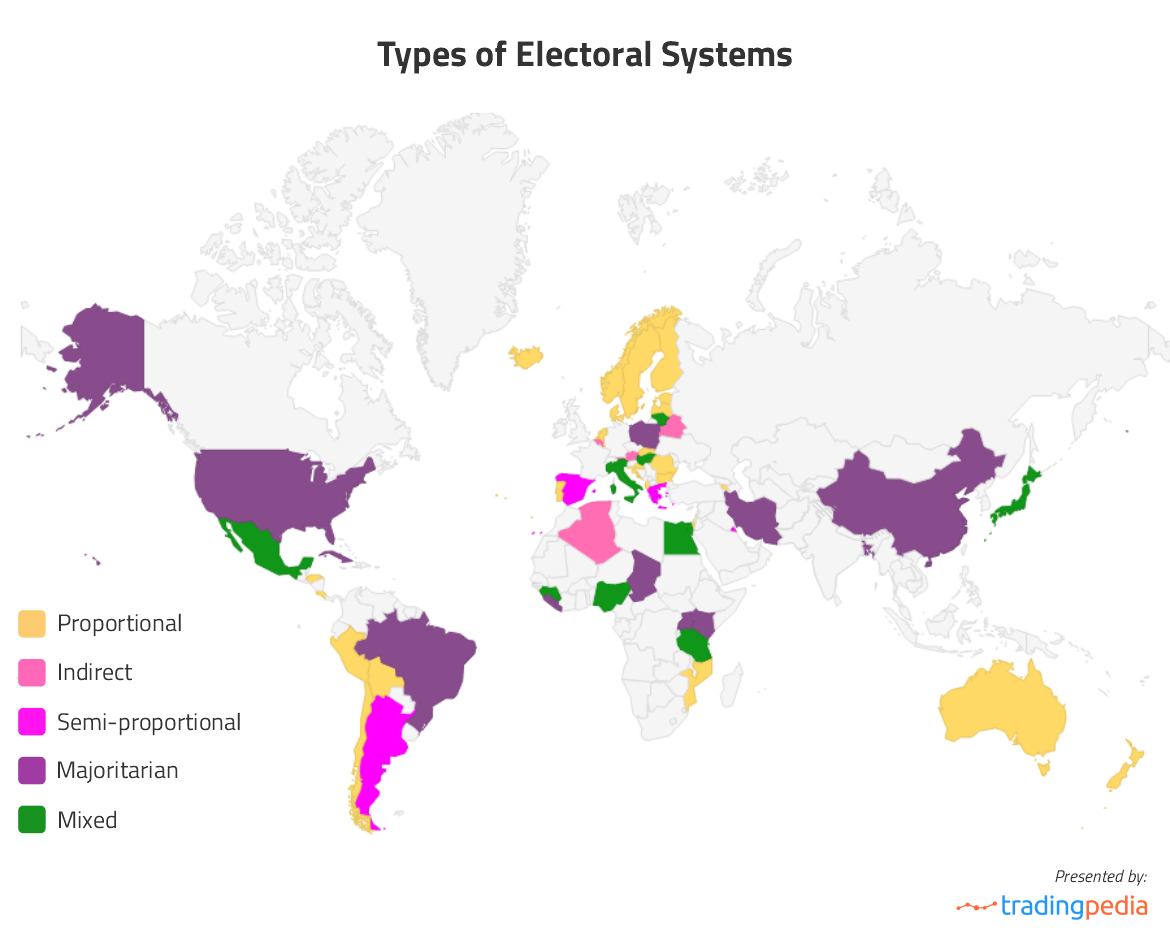 Electoral systems determine how elections are conducted and are based on a particular set of rules. They can be classified as:

Many constitutions try to combine the benefits of two or more of these into different mixed systems with different rates of success – some versions deliver better proportional representation, some are great for expressing support for a certain candidate over a party, and some are just easier to understand.

In this system, the candidate who receives the highest number of votes wins. One of the most commonly used plurality systems is the so-called First-past-the-post, where candidates receiving less than 50% of the vote can still win.Thus, it is not appropriate for electing members of an assembly, and is mainly used in two-party systems or in presidential elections. Another type of plurality system is party block voting, where voters choose between multiple candidates of a single party – the winning party takes all seats in the assembly.

In these systems, candidates need to receive the majority of the popular vote in order to win. In some cases, the election is conducted in a single round using ranked voting (also called instant run-off voting) but it can also take several rounds until a winner is chosen. The two-round system, on the other hand, is the most common system used for presidential elections around the world.

This is the most widely used electoral system for national legislatures. Subgroups of the electorate (voters from a certain district, voters for a particular party and so on) are proportionately represented in the parliament. Party-list proportional representation is one popular form of this system – through closed lists, voters cannot pick any of the candidates, while through open lists, voters can vote for both the party and the candidates they prefer. This way, they directly influence the list of candidates proposed by the party. Another form is the single transferable vote, which allows voters to choose only candidates and not parties.

There are also several different ways to allocate seats in proportional representation. These include the D’Hondt method, Hagenbach-Bischoff, Webster/Sainte-Laguë, as well as the Hare quota, Droop quota, and the Imperiali quota.

Voter turnout, also called election participation, is extremely important in modern democracies, but in recent years, fewer and fewer people have demonstrated trust in the political system. Voter turnout percentages have fallen, which obviously affects the actual political representation of the people in parliaments. Moreover, the low voter turnout puts the legitimacy of elected candidates into question. 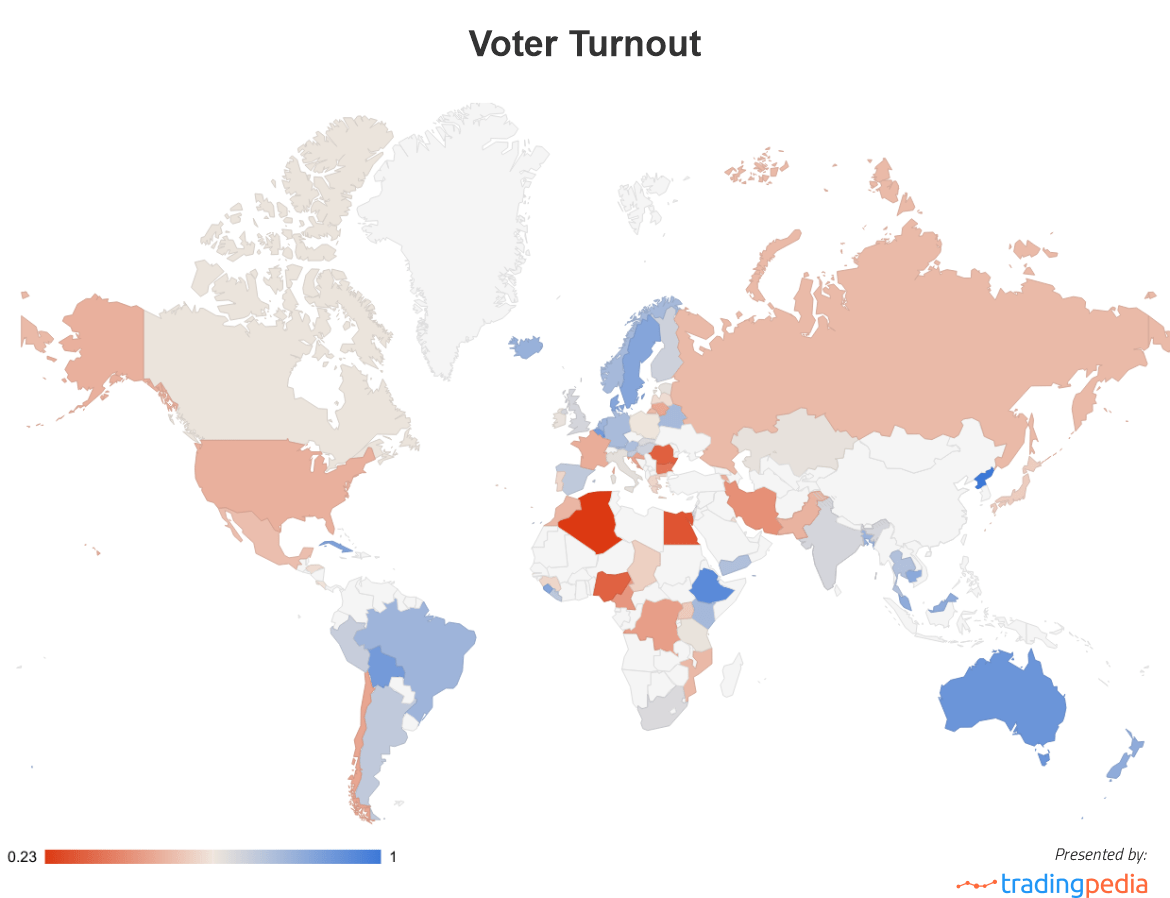 Although no direct association should be made between the voting system of a country and its democracy index, it is interesting to note that many authoritarian regimes pretend to conduct democratic elections. North Korea, for instance, has several political parties, although a single party exercises full control over the political process, the economy, foreign relations, and the military. 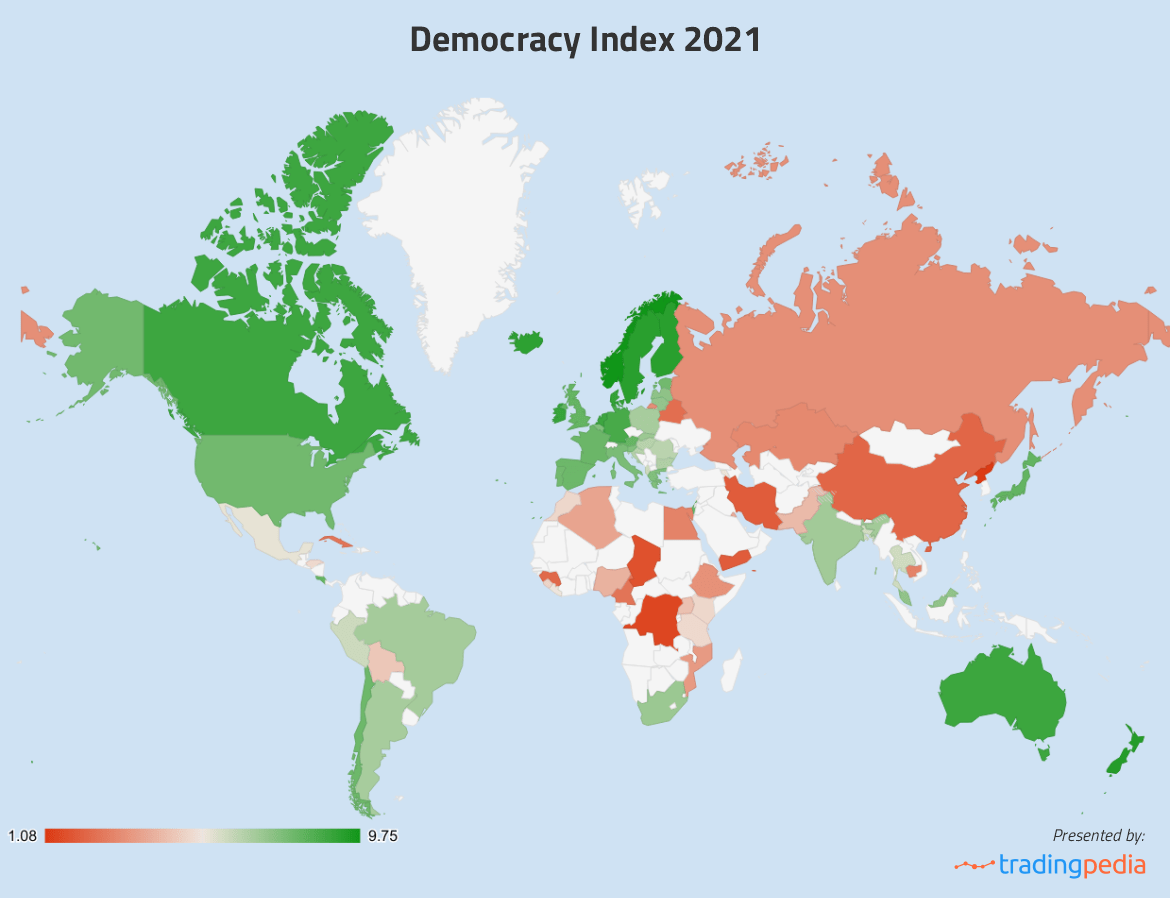 For this report, we looked at 79 countries around the world and their electoral systems. The Democracy Index we added is the latest published Index by the EIU for 2021.

We also collected data for voter turnout, available for the most recent parliamentary election from the International Institute for Democracy and Electoral Assistance. For most countries, the figures refer to voters as a percentage of all eligible people, but for others, voter turnout represents the percentage of those who have registered for the election in advance. In certain countries, voting in general elections is mandatory, which is why the turnout there is usually above 95%. In North Korea, authorities reported a voter turnout of 99.99% in the 2019 election for deputies to the 14th Supreme People’s Assembly.