Internet use has increased massively in the past two decades and today, there are more active users than ever. Social media websites, in particular, have become extremely popular, with Facebook being the third most visited site in 2021. Despite the recent rise of Instagram businesses and influencers, Facebook remains the most popular marketing platform – in 2021, 78% of its users said they have found new products and services on the platform according to data published by BroadbandSearch. TikTok, on the other hand, was the most downloaded app last year after launching internationally back in 2017.

Social media is a big part of teenagers’ lives – new generations are now being born in a digital world where texting and sharing videos have largely replaced real-life (or irl, as gen z’s would say) communication. Tracking what interests young people and, particularly teenagers, when accessing the Internet is a fascinating, useful tool for spotting larger trends and even peeking into the future. Which social media platform will dominate in five or ten years? Where will people search for news, entertainment, and products? How will businesses adapt to the ever-changing digital landscape? Striving for answers, the team at TradingPedia examines a new report called Teens, Social Media and Technology by the Pew Research Center. It uncovers some interesting tendencies in young people’s preferences such as the fact that nearly all teens right now use YouTube whereas only 32% say they use Facebook. 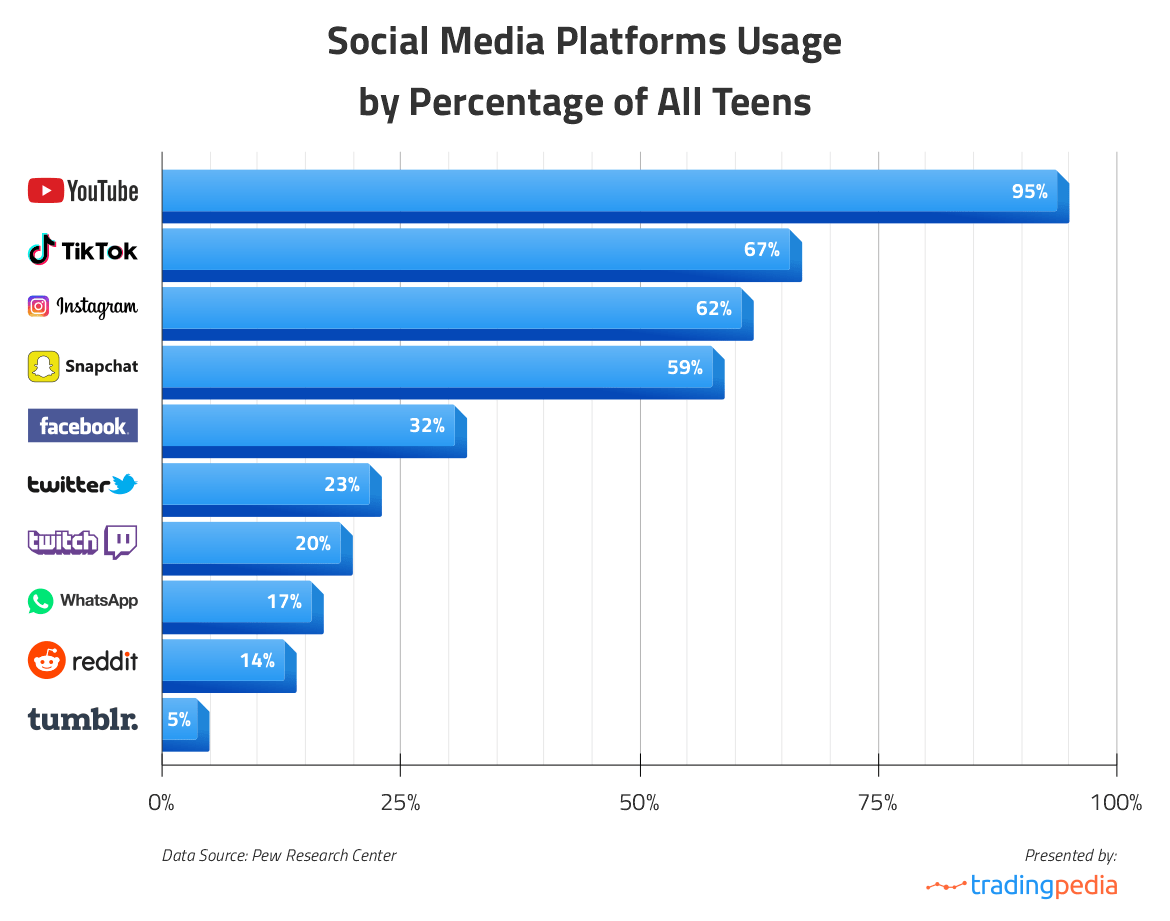 Before diving into the teen social media landscape we must understand the relevance of the Internet in today’s life. With a world population of 7.93 billion, 5.47 billion are Internet users according to data by Nielsen Online. This means that currently, 69% of all people on Earth have access to and use the Internet and from 2000 to 2022, the penetration rate increased by 1,416%. As of 2021, 4.48 billion people were on social media, with Facebook, YouTube, and WhatsApp each having more than 2 billion monthly active users.

And while Facebook remains the top platform of choice among all age groups in the U.S. and worldwide, American teens prefer to spend their time mostly on YouTube. The website which launched in 2005 as a video streaming platform is now the most popular social media site among teenagers in the U.S., with 95% saying they ever used it and 19% admitting they visit it almost constantly. Next in popularity is TikTok (and its original Chinese version Douyin) which was released in 2016 but did not become globally available until 2018 when it merged with the Chinese social media platform Musical.ly. Of those surveyed by Pew Research Center, 67% say they have used the app and 16% say they use it almost constantly.

The third most popular social media platform among U.S. teens is the video-sharing service Instagram, owned by Meta Platforms (known until recently as Facebook, Inc.). 62% of respondents are Instagram users, while 10% open or use it almost constantly. Photo sharing app Snapchat is following closely, with 59% of teens using it. 15% say they are constantly on it. Meanwhile, less than a third (32%) of all teens in the survey visit Facebook and only 2% are almost constantly on it. Note that researchers did not include Facebook’s Messenger as a separate platform in the survey, so it is likely that these percentages reflect the use of both Facebook and Messenger.

Teens were also asked about several other social media platforms and the results show that 23% used Twitter, 20% used Twitch, 17% were on WhatsApp, 14% used Reddit and a mere 5% say they ever used Tumblr.

Things change quickly in the world of social media, even more so when it comes to young people and their preferences. Facebook was once the most used social media website among teenagers in the U.S. with 71% of them being on it in 2014. Data from a similar survey by Pew Research Center shows that in 2014-2015, Instagram was the second most popular after Facebook with 52% using it, while Snapchat was used by 41% of respondents.

By 2018, when researchers conducted yet another survey, there was a significant shift in the social media landscape. Facebook’s popularity dropped and it had become the fourth most used platform with only 51% of teens using it. YouTube had replaced it – 85% of teenagers in the U.S. said they used the website. Another interesting fact is that two platforms from the 2014-2015 survey were not present in the 2018 statistics – Vine and Google+, which were discontinued.

Boys vs Girls and other demographics

There are several noticeable differences in the use of platforms between boys and girls, between white, black, and Hispanic. For instance, teen boys are more likely to use Twitch and Reddit. The video game live streaming service Twitch, which is owned by Amazon, is used by 26% of teen boys in the survey compared to only 13% of girls. 20% of boys used Reddit, a news aggregation and discussion website, and only 8% of girls said they ever used it. Teen girls, on the other hand, are more likely to use TikTok, Instagram, and Snapchat – 73%, 69%, and 64% respectively, compared to 60%, 55%, and 54% of boys.

How frequently do teens use social media?

Since TikTok exploded in popularity in 2018 and 2019, there have been concerns that the app and the short video form of the content, may affect users’ attention spans and cause addiction. However, findings from the Pew Research Center report show that YouTube is used more frequently than TikTok, at least at first glance. Nearly three-quarters or 77% of teens visit YouTube at least once a day compared to 57% who say they are daily TikTok users. Daily (or more frequent) use of platforms drops to 51% for Snapchat, 49% for Instagram, and 18% for Facebook.

But when we look at how many use TikTok and Snapchat at all, we can see that a larger share of users log in daily or more frequently. Around 86% of those who use the two platforms open them every day. And a quarter of users are on the apps almost constantly. This brings us to the next question – is it hard for teens to stop using social media? Unsurprisingly, the short answer is “Yes”, at least for half of the youngsters that took part in the survey.

Moreover, 78% of teens who say they spend too much time on social media admit it would be hard for them to quit it, with 29% describing it as “very hard”.