The gender pay gap in the United States has been an intensively discussed topic for several decades. TradingPedia‘s research team has decided to look into that matter more closely and present some actual data reflected through different employee characteristics, including occupation, age, education and type of employment.

Women engaged in managerial roles in the United States, on average, earned 37.79% less per week compared to men in similar occupations, according to data by the US Bureau of Labor Statistics for the second quarter of 2022.

Women in management, professional and related occupations, on average, were paid $1,265 per week, compared with $1,743 earned by men in similar roles.

“The data affirms the years-long tendency female executives to be paid less for their time, effort and skill compared to men in similar positions. And the pay gap seems to continue widening, as in Q2 2021, female managers received 32.72% less in average weekly remuneration than male executives,”

The same tendency can also be observed in other business areas, including services, sales, administrative support, construction, transportation etc.

Female employees working full-time in sales and office occupations, on average, received $799 in weekly pay during Q2 of 2022, compared with $1,018 earned by men in similar roles. Q1 2021 data had pointed to $762 in average weekly earnings for women and $985 for men.

Women engaged full time in service occupations, on average, received $656 in weekly remuneration, compared with $773 for male employees. In Q1 2021, women in this business field had earned $586 per week, while men – $713.

Our infographic below describes some of the most important aspects of the gender pay gap by occupation, ethnicity and age. 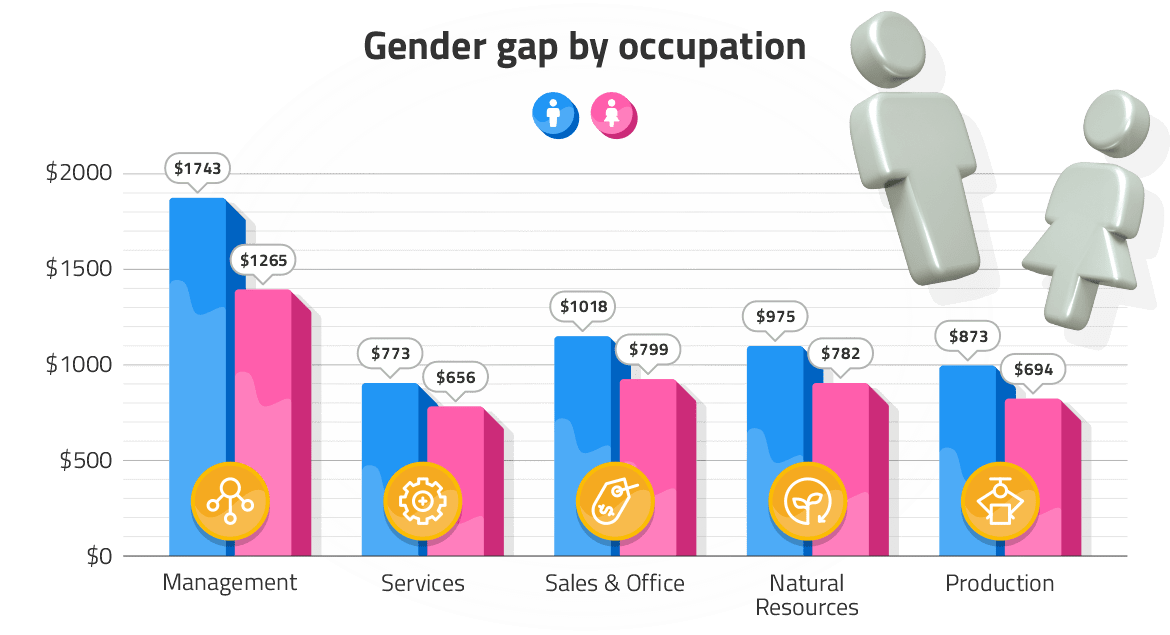 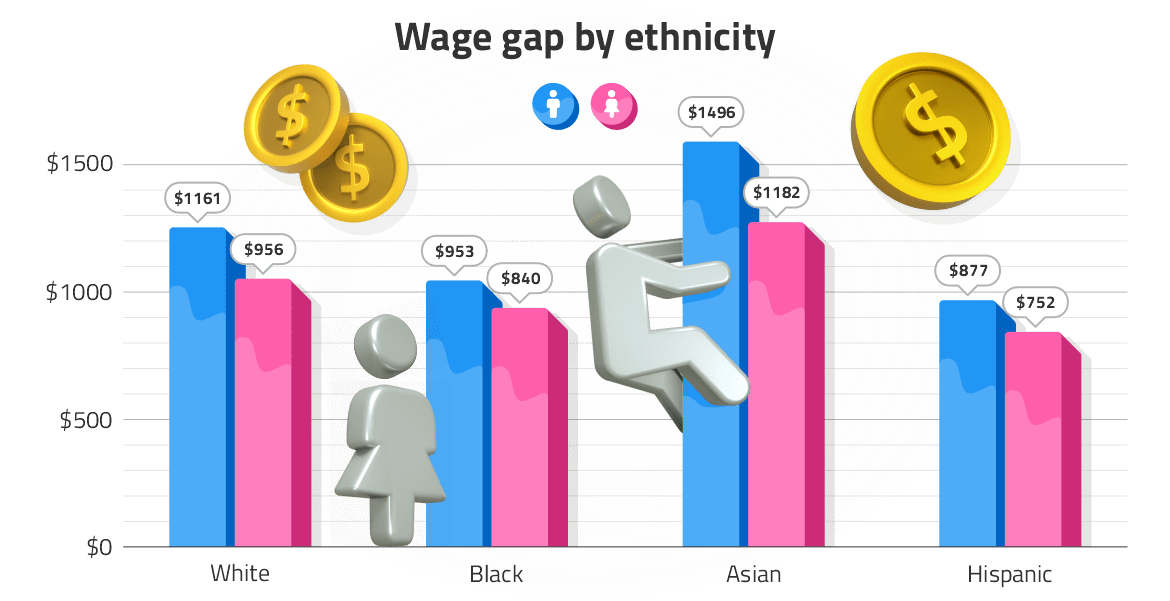 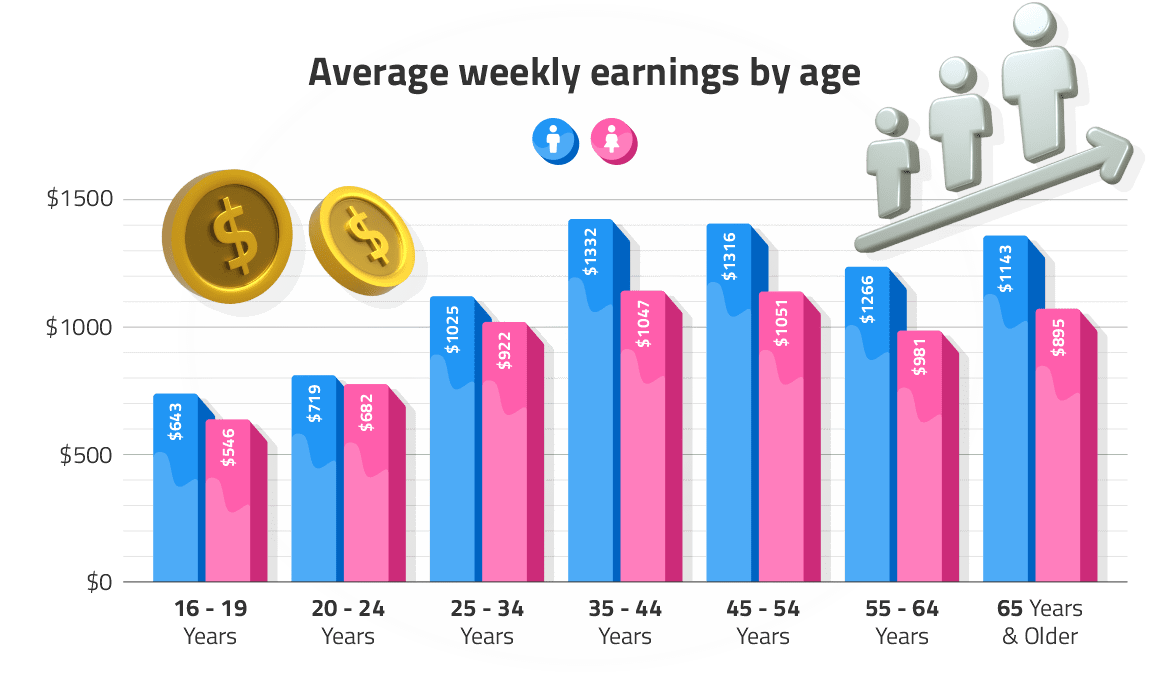 And, full-time male workers having an Advanced degree (Master, Professional or Doctoral), on average, received $2,012 in weekly pay, or 30.56% more than full-time female workers with the same education profile.

On the other hand, the pay gap between men and women having a diploma lesser than high school was the smallest. 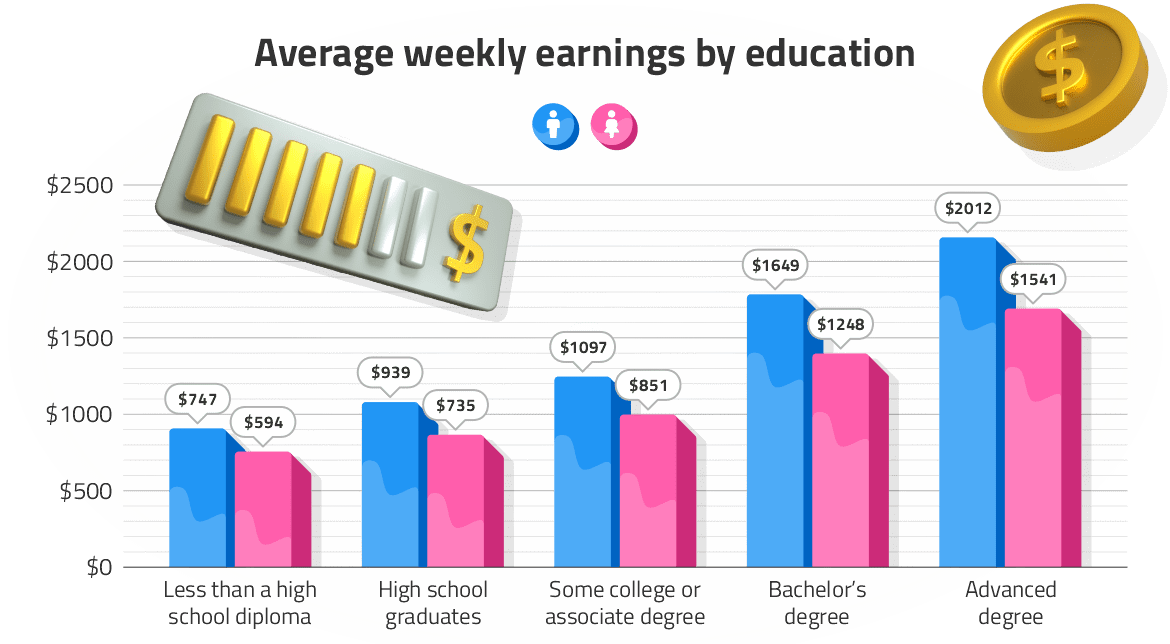 Meanwhile, the highest-earning 10% of male employees with a diploma lesser than high school earned 50.22% more per week than their female counterparts. 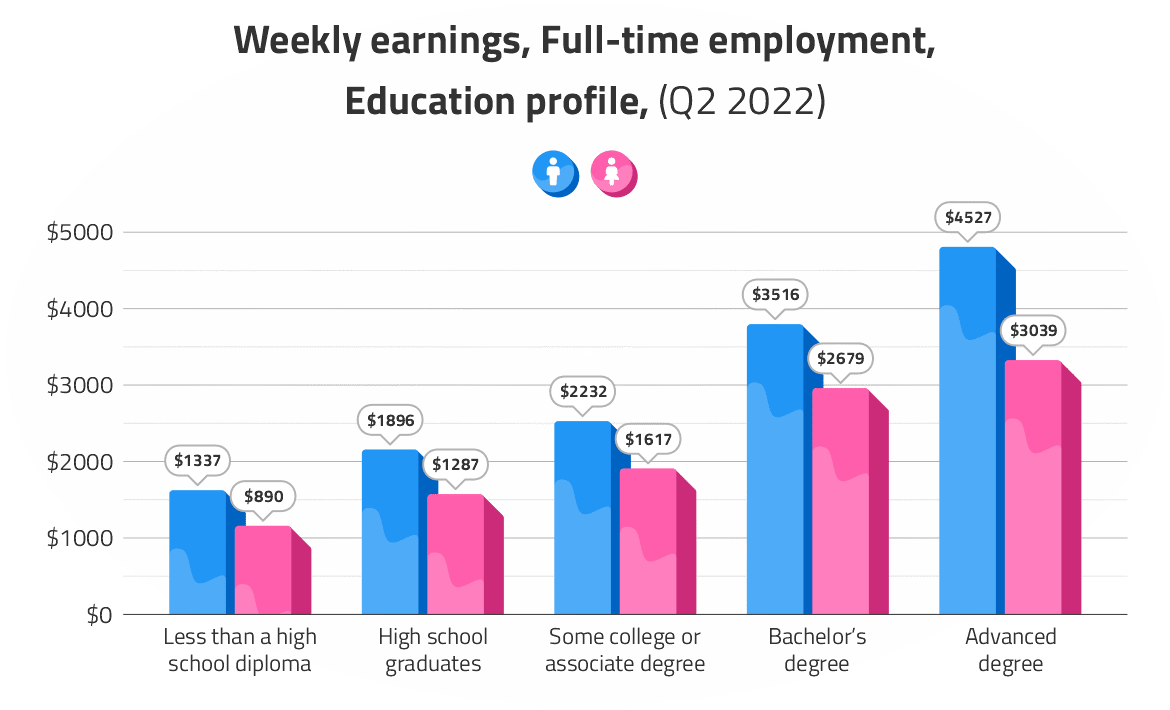 Let us now see how the situation with the lowest-earning 10% of male and female workers is. Male employees with an Advanced degree earned at least $949 per week, while female employees with the same level of education earned 16.02% less ($797).

Considering workers with education lesser than high school, men earned at least $448 per week, while women earned 15.40% less than that. 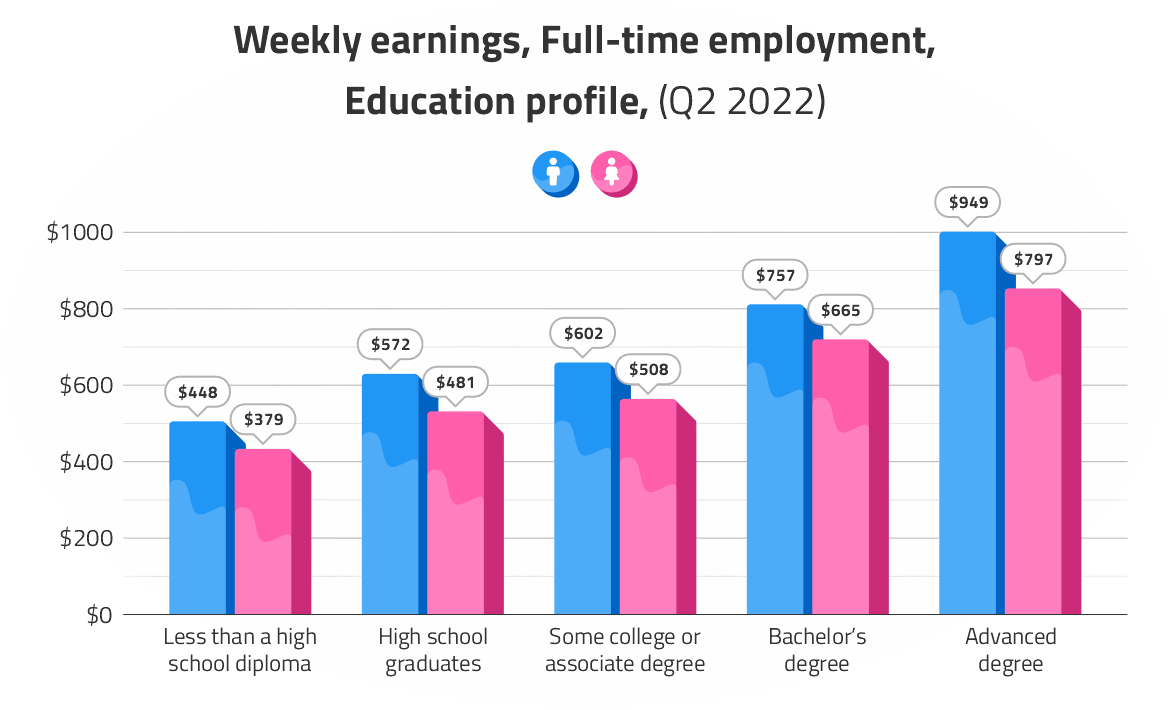 When it comes to part-time employment, the remuneration gap between men and women was tighter. Part-time male workers, aged 25 years and older, on average, earned $410 per week compared with $394 for part-time female workers. 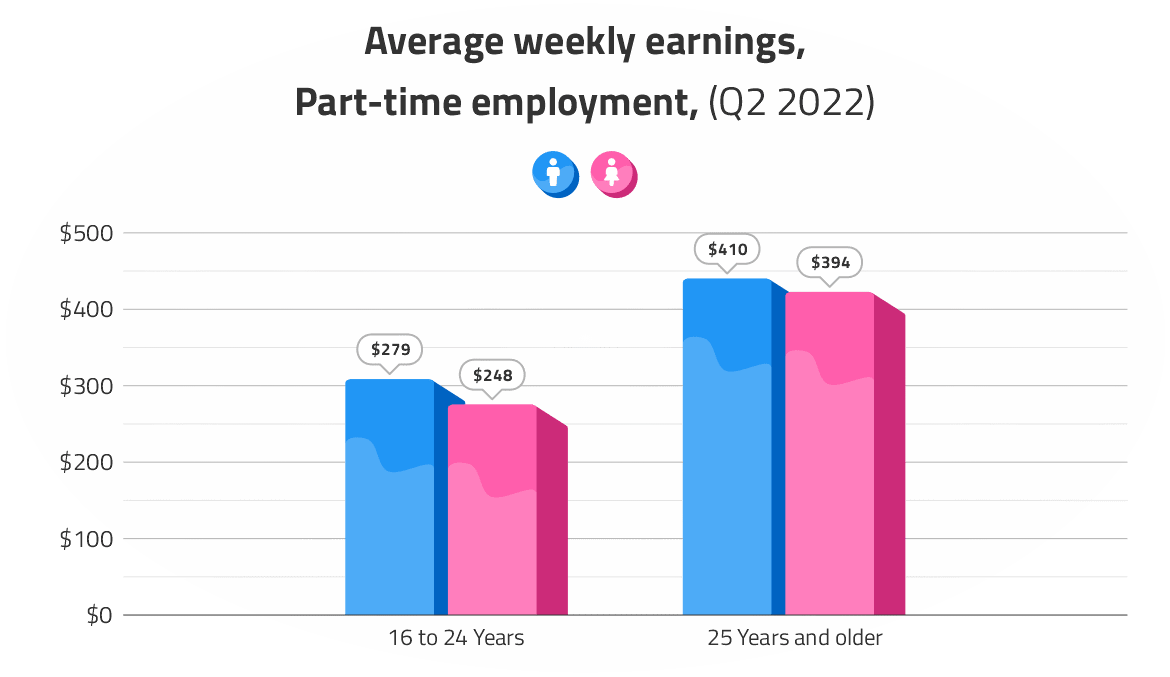 Among all ethnicity groups, Asian men and Asian women working part time were earning the most per week, BLS data showed. 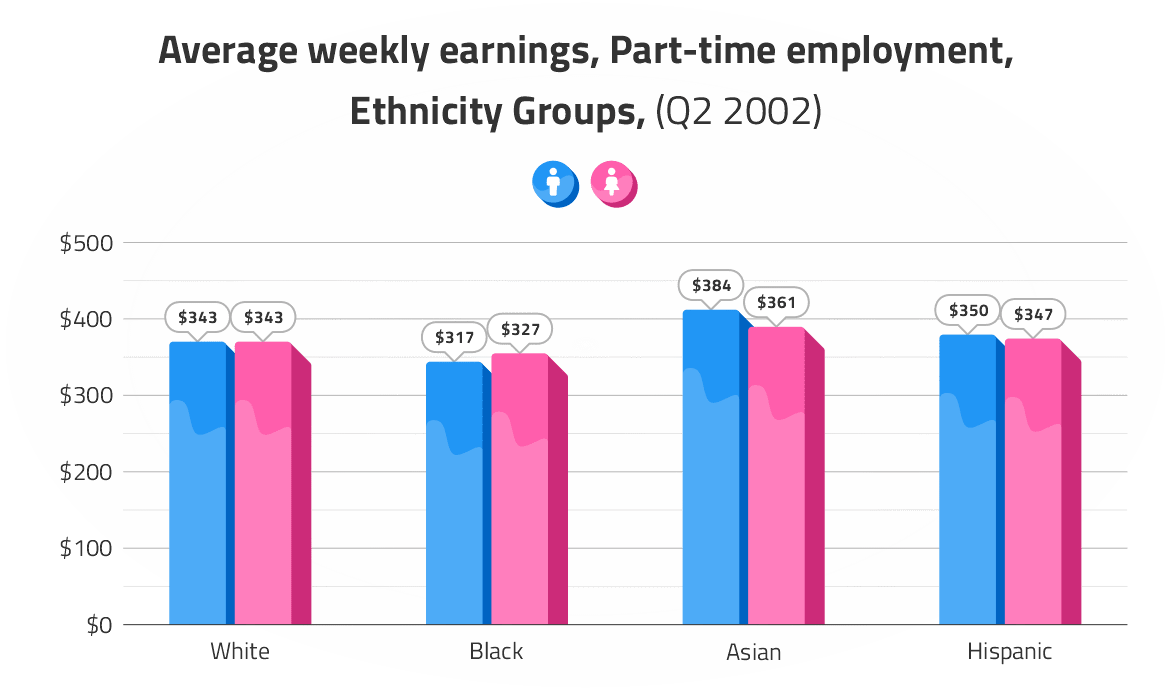