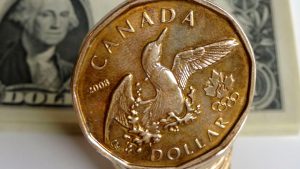 Meanwhile, crude oil futures marked their 91st drop out of the past 165 trading days on August 5th. Oil for September delivery went down as low as $41.06 per barrel and closed at $41.80, edging down 0.31% compared to Thursday’s close. As of 8:43 GMT today the commodity was advancing 1.34% to trade at $42.36, after going up as high as $42.40 per barrel earlier. Crude oil prices and CAD valuation tend to be strongly positively correlated.

On Monday USD/CAD trading may be influenced by the following macroeconomic report as listed below.

The overall value of building permits in Canada, issued by municipalities, probably increased 1.5% in June, according to market expectations. The total value of building permits in the country went down 1.9% to reach CAD 6.8 billion in May compared to a month ago, due to lower construction intentions for commercial buildings in Quebec and Ontario and single-family houses in Ontario. The value of non-residential permits shrank 3.3% to CAD 2.5 billion, due to a 15.6% drop in construction intentions for commercial buildings. The value of residential permits contracted 1.1% to CAD 4.3 billion, as permits for single-family dwellings declined 7.2%.

Building permits, as an indicator, provide information regarding demand in Canada’s housing sector. In case the total value of permits increased more than expected in June from a month earlier, this would have a limited-to-moderate bullish effect on the Canadian Dollar. Statistics Canada is expected to release the official numbers at 12:30 GMT.

Taking into account the business week ended on August 5th and the daily closing levels of the major currency pairs, we come to the following conclusions in regard to the strength of relationship:

1. During the examined period USD/CAD moved strongly in one and the same direction with USD/JPY.

2. USD/CAD moved almost independently compared to NZD/USD during the past week.

3. The correlation between USD/CAD and the remaining major pairs was insignificant.

The spread between 2-year US and 2-year Canadian bond yields, which reflects the flow of funds in a short term, widened to 0.205% on August 5th from 0.109% on August 4th. The August 5th yield spread has been the largest one since June 14th, when the difference was 0.229%.

By employing the Camarilla calculation method, the daily levels of importance for USD/CAD are presented as follows:

By using the traditional method of calculation, the weekly levels of importance for USD/CAD are presented as follows:

In monthly terms, for USD/CAD we have the following pivots: