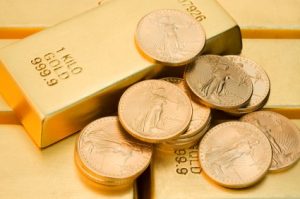 On Wednesday gold for delivery in June traded within the range of $1,246.00-$1,249.50. Futures closed at $1,247.25, going up 0.41% on a daily basis. It has been the 31st gain in the past 60 trading days and also a third consecutive one. The precious metal has increased its advance to 1.81% so far during the current month, following three consecutive months of gains.

On the Comex division of the New York Mercantile Exchange, gold futures for delivery in June were advancing 0.84% on Thursday to trade at $1,257.70 per troy ounce. The precious metal went up as high as $1,258.70 during the early phase of the European trading session, or the highest price level since April 12th, while the current daily low was at $1,239.00 per troy ounce, recorded during mid-Asian trade.

Yesterday the Federal Open Market Committee left the target range for the federal funds rate intact between 0.25% and 0.50%, as largely expected, citing improvement in US labor market, but a certain slowdown in economic activity. According to extracts from the FOMC Policy Statement, released on April 27th: “Growth in household spending has moderated, although households real income has risen at a solid rate and consumer sentiment remains high. Since the beginning of the year, the housing sector has improved further but business fixed investment and net exports have been soft.”

“Inflation is expected to remain low in the near term, in part because of earlier declines in energy prices, but to rise to 2 percent over the medium term as the transitory effects of declines in energy and import prices dissipate and the labor market strengthens further.”

Today the precious metal may be strongly influenced by the preliminary report on US Gross Domestic Product. The preliminary estimate of the US GDP probably pointed to an annualized rate of growth of 0.7% in the first quarter of the year, according to market expectations. The final GDP estimate for Q4, reported on March 25th, pointed to an annual growth of 1.4%, a revision up compared to the second GDP estimate. In case expectations were met or even a larger slowdown was reported in Q1, this would have a strong bearish effect on the US dollar and a strong bullish effect on gold. The preliminary GDP report is due out at 12:30 GMT.

Meanwhile, silver futures for delivery in May were gaining 0.84% on the day to trade at $17.405 per troy ounce, after going up as high as $17.425 a troy ounce during the early phase of the European trading session. The latter has been an almost exact test of the high from April 27th.

By employing the traditional calculation method, the daily pivot levels for gold are presented as follows:

By using the traditional method of calculation again, the weekly pivot levels for gold are presented as follows: