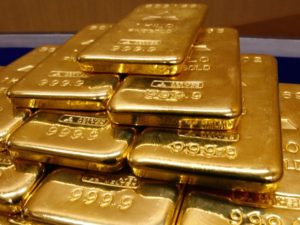 Gold rose for a fifth session on Wednesday and held ground near Tuesdays three-week high as Beijings devaluation of the yuan spurred fears among investors of a currency war, prompting demand for safe haven assets such as gold.

The precious metal continued its advance as investors weighed the positive and negative aspects of the yuans devaluation, with some market players selling gold on deflation concerns, while others bet on it as an alternative asset during times of currency depreciation and uncertainty.

Beijings unexpected 2% devaluation of the yuan on Tuesday, which was seen as a bid to bolster exports a few days after data showed a surprising slump in Chinese outbound shipments in July, was condemned by US lawmakers as a push for an unfair export advantage. The change to Chinas currency regime continued to ripple through global markets today even after policy makers said there is no economic ground for a continuous fall.

Still, with Beijing allowing the yuan to slide for a second day versus the dollar, investors feared the Chinese currency might enter a spiral of depreciation, forcing the Peoples Bank of China at some point to either drop the implementation of the new fixing mechanism and stabilize the fixing, or to heavily intervene.

And although gold would benefit from increased safe-haven bids, a currency war would lead to further dollar strength, negatively affecting the precious metal, and it would become more expensive for top consumer China to import gold, effectively reducing demand that has already been weak since 2014.

Meanwhile, the devaluation of the yuan is not expected to deter the Federal Reserve from initiating its first interest rate hike since 2006. Atlanta Federal Reserve President Dennis Lockhart said last week that the central bank is close to an increase and it would take “significant deterioration” in the coming US economic data for him to not support a rate hike in September. He confirmed on Monday a decision to hike should come soon, but stressed that the subsequent increases should be gradual.

Reflecting the poor investor sentiment toward gold, assets in the SPDR Gold Trust, the biggest bullion-backed ETF, were unchanged on Tuesday for a second day at 667.69 tons, the lowest since September 2008. Holdings in the fund have shrunk by nearly 51% since peaking at 1353.35 tons in December 2012.

According to Binary Tribune’s daily analysis, December gold’s central pivot point on the Comex stands at $1 106.7. If the contract breaks its first resistance level at $1 120.1, next barrier will be at $1 132.5. In case the second key resistance is broken, the precious metal may attempt to advance to $1 145.9.