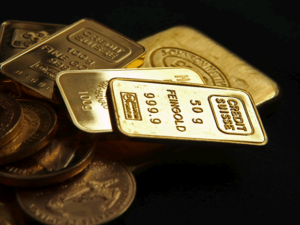 Short covering helped gold rise on Monday after scoring the longest stretch of weekly declines since 2012, with investors remaining bearish on the precious metal ahead of FOMCs policy meeting this week.

The precious metal tumbled to the lowest in more than five years last week and is headed for its biggest monthly loss in two years as the Federal Reserve is expected to raise interest rates in the second half of 2015. It is down more than 7% this year and US speculators turned most bearish since the government started tracking data in 2006 as the prospects of the first increase in borrowings costs since 2006 fueled a rally in the dollar against a basket of major trading peers and bolstered demand for interest-yielding assets.

Fed Chairwoman Janet Yellen reiterated in her testimony before US Congress earlier this month that the central bank remains on track to hike rates for the first time in nearly a decade. Her comments were in line with the FOMC’s most recent policy statement and a speech she held on July 10th when she underscored a continued weakness in the US labor market but also expressed confidence that the US economy will continue to grow steadily in 2015, helping improve labor conditions.

The Fed holds a two-day policy meeting starting Tuesday which investors will closely observe for more signals pointing to a rate hike this year, with analysts projecting median odds of 50% for an increase as early as September. The August contract managed to recover some lost ground on Monday, primarily due to short covering, after it slid to $1 072.3 on Friday, refreshing a five-year low hit earlier last week.

However, the metal is expected to drop further once the increase in borrowing costs is announced, with analysts forecasts overall showing a drop to the $1 000-$1 050 range. Investors tend to turn bearish on gold at times of economic growth and rising interest rates as the precious metal yields returns only through price gains, while investment instruments that pay interest, such as bonds, become more attractive.

“Youre starting to see some real fear in the gold market for the first time,” said for Bloomberg Eric Crittenden, chief investment officer at Longboard Asset Management LLC. “I’m not going to be the least bit surprised if this turns into something very significant and we get a lot lower prices.”

According to Binary Tribune’s daily analysis, August gold’s central pivot point on the Comex stands at $1 086.2. If the contract breaks its first resistance level at $1 100.2, next barrier will be at $1 114.8. In case the second key resistance is broken, the precious metal may attempt to advance to $1 128.8.