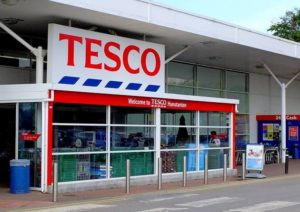 Britains biggest supermarket chain Tesco Plc announced on Friday a further decline in sales during the first three months of the current fiscal year but performance topped expectations, sending signs of a fragile recovery after a record annual loss.

Tesco said that sales at stores open for at least one year fell by 1.3% in the quarter ended May 30th despite significant deflation and the impact of reduced couponing, reflecting an improvement on the 1.7% contraction in the fourth quarter of the previous fiscal year ended February. This also beat analysts projections for a decline in the range of 1.6% – 3%.

The company said that UK like-for-like volumes were up 1.4%, while transactions rose by 1.3% and its customer base grew by 180 000 people. Tesco attributed the better-than-expected performance to lower prices and better customer service and product quality, which helped draw more people to its stores and lift volumes.

“We set out to serve our customers a little better every day and the improvements we are making are starting to have an effect,” said Chief Executive Dave Lewis in the companys statement. “Whilst the market is still challenging and volatility is likely to remain a feature of short-term performance, these first-quarter results represent another step in the right direction.”

“We do feel we are more in control than perhaps we were a year ago and this is another step in the right direction, but nobody ever said this was going to be quick or easy,” Mr. Lewis told reporters.

Tesco also underscored that like-for-like sales grew in Central Europe and Turkey, with the Central European restructuring being largely complete, while some improvement was also achieved in Asia, but market conditions in the region remained challenging.

Lewis, who took the helm last September, is driving a turnaround of the company by cutting costs and selling assets as he seeks to cut the retailers debt and mend the companys credibility after its toughest year in its 96-year history. The company revealed in 2014 that it had overstated its first half pre-tax profit by £250 million, which was followed by a series of profit warnings and the announcement of a record £6.4-billion annual loss.

“Whichever way you look at it, across from the fourth quarter into the first quarter, the trends… some of them are not higher but they are in the right direction,” said Alan Stewart, finance director.