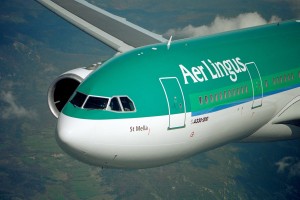 The Irish government backed the sale of the states 25% stake in Aer Lingus to International Consolidated Airlines Group SA, allowing the parent of British Airways and Spains Iberia to formally launch its bid for the Irish carrier.

Under the offer, Aer Lingus shareholders will receive €2.55 in cash per Aer Lingus share, comprising a cash payment of €2.50 and a cash dividend of €0.05 per share. The transaction values the Irish company at €1.4 billion, IAG said in a statement. The proposed offer was recommended by the board of Aer Lingus in January, but the deal was delayed as the Irish government presented a list of demands that included reassurances on jobs, transatlantic services, and sustaining connections to Londons Heathrow.

“Theres a number of extremely important changes that have led to this decision by government,” said Irelands transport minister Paschal Donohoe at a news conference.

Willie Walsh, IAGs chief executive, has promised to add 150 jobs at the Irish airline by the end of 2016, develop and promote regional airports at Shannon, Cork and Knock, and enhance Irelands air links to Europe and North America. IAG also guaranteed to keep Aer Lingus 23 take-off and landing slots at Heathrow for Irish routes over the next seven years, which ultimately secured government support.

Acquiring the Irish carrier would enable IAG to expand its transatlantic services from Dublin airport, where there is capacity for expansion, unlike the home of its biggest unit British Airways at Heathrow, which is full. Although it ranks only 21st by seat volume in Europe, Aer Lingus provides a combination of transatlantic routes and a low-cost base that can be leveraged for a greater effect as part of IAG.

“Aer Lingus, Ireland and IAG would all benefit from this deal,” Mr. Walsh said. “Aer Lingus would maintain control of its brand and operation while gaining strength as part of a profitable and sustainable airline group in an industry thats consolidating. Acquiring Aer Lingus would add a fourth competitive, cost effective airline to IAG, enabling us to develop our network using Dublin as a hub between the UK, continental Europe and North America.”

“The company will reap the commercial and strategic benefits of being part of the much larger and globally diverse IAG Group,” said Aer Lingus Chairman Colm Barrington. “This access to greater global scale will accelerate growth across our network, enhance Irelands position as a natural gateway connecting Europe and North America, give Irish tourism access to major traffic flows and customer loyalty programmes and provide better access for business interests and to cargo flows.”

The deal is now pending the backing of the carriers other main shareholder, Europes largest budget airline Ryanair Holdings Plc. It has declined to comment whether it would accept IAGs offer to sell its 30% stake, although analysts expect it would. The government had said Ryanairs stance on the transaction was key to its decision.

“Were hopeful that Ryanair will see this as an attractive offer for their stake in Aer Lingus and we will wait to see what Ryanair and the Ryanair board says in response to this,” Mr. Walsh said on Wednesday.