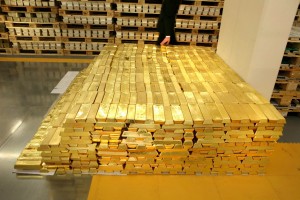 Gold traded near the highest in two-weeks on Monday following three sessions of gains after the Federal Reserve reduced its overall evaluation of the U.S. economy.

Despite dropping their pledge to be “patient” towards the planned interest rate hike last Wednesday, Fed officials warned that they are not going to rush it either. Policy makers expressed concerns about the robust dollar and sluggish inflation. Feds preferred metric has been below its target of 2% for 33 consecutive months, more recently pressured by the lower oil prices.

Fed Chair Janet Yellen has previously warned that she wants to be “reasonably confident” that inflation would hit the desired level before initiating the first interest rate increase since 2006. Fed officials also said that they now expect the federal fund rate to end the year at 0.625%, lower than their December estimate of 1.125%.

Before Feds two-day meeting the broad market had expected policy makers to lift borrowing costs in June, but Feds statement shifted projections towards September at the earliest. Additionally, the news dented the otherwise robust performance of the U.S. currency.

Atlanta Fed President Dennis Lockhart said on Friday that policy makers should start lifting borrowing costs in the middle of 2015 or later, while his Chicago colleague Charles Evans restated that he believes a rate hike could be postponed until next year. Since Wednesdays meeting, policy makers have provided mixed signals about the timing of the rate hike, adding uncertainty towards the matter.

“With the rate hike not expected until September, some unwinding of short positions on gold are expected and a weaker dollar in the interim is also set to boost demand for gold,” said Phillip Futures analyst Howie Lee, cited by Reuters.

Despite the weaker dollar, money managers and hedge funds reduced their long positions in gold futures and options for a sixth consecutive week in the seven days through March 17th, a report issued by the U.S. Commodity Futures Trading Commission showed on Friday.

Additionally, assets in the SPDR Gold Trust, the biggest bullion-backed ETF, dropped 5.37 tons on Friday to 744.4 tons, their lowest since late January.

Cleveland and San Francisco Fed heads are scheduled to speak later today and traders would be looking for additional hints on the rate hike timing. The planned lifting would dent demand for the precious metal as gold offers returns only through price gains. The yellow metal hit a four-month low before the Feds statement, pressured by mounting speculations that policy makers would boost interest rates sooner.

According to Binary Tribune’s daily analysis, April gold’s central pivot point on the Comex stands at $1 180.0. If the contract breaks its first resistance level at $1 192.0, next barrier will be at $1 199.5. In case the second key resistance is broken, the precious metal may attempt to advance to $1 211.5.