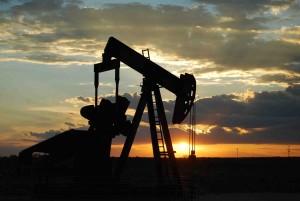 West Texas Intermediate crude held near the lowest in six years and Brent fell towards $54 as US inventories were at the highest in more than 80 years, exacerbated by oversupply fears after Kuwait said OPEC needs to maintain its production policy.

The Organization of the Petroleum Exporting Countries, which accounts for around 40% of global crude supplies, has no intention of hosting an extraordinary meeting to discuss output policy before the scheduled one on June 5th, Kuwait Oil Minister Ali Al-Omair said. The group pumped 30.6 million barrels per day last month, exceeding its 30-million-bpd target for a ninth consecutive month.

OPEC, led by Saudi Arabia, decided to retain its collective production aim at a November 27th meeting in order to protect market share and curb US shale oil output, a boom in which has driven US production to the highest in more than three decades.

The Energy Information Administration reported on Wednesday that US crude stockpiles surged by 9.622 million barrels to 458.5 million last week, the highest in at least 80 years, while supplies at the Cushing, Oklahoma storage hub jumped to 54.4 million barrels from 51.5 a week earlier, the most on weekly data spanning back to April 2004.

US crude production increased by 53 000 barrels per day to 9.419 million bpd, the highest on weekly records tracked since January 1983, driving crude stockpiles up for a tenth straight week.

Ric Spooner, a chief strategist at CMC Markets in Sydney, said for Bloomberg: “The demand-supply imbalance is going to need to be fixed by an adjustment to supply. Traders are waking up to the harsh reality of the U.S. inventory builds and it’s getting difficult to ignore that.”

Investors also eyed how diplomatic talks between Iran and world powers unfolded. A framework agreement on Irans nuclear program in the coming days was unlikely, a senior European negotiator said on Thursday, citing Irans unwillingness to compromise. The two sides are seeking to end a decade-long dispute over the Islamic Republics nuclear activities in exchange for lifting international economic sanctions, including a curb on crude exports, that have battered the Iranian economy.

A deal resulting in the removal of sanctions would make way for additional Iranian oil to flood the already oversupplied global oil market. Iran’s oil minister Bijan Namdar Zanganeh said on Monday that the Islamic Republic is ready to ramp up output by 1 million barrels per day, if the export cap is lifted. The Persian Gulf nation exported 1.2 million barrels per day of oil in February, according to the IEA.

According to Binary Tribune’s daily analysis, WTI May futures’ central pivot point is at $45.70. In case the contract breaches the first resistance level at $46.64, it may rise to $47.74. Should the second key resistance be broken, the US benchmark may attempt to advance $48.68.

If the contract manages to breach the first key support at $44.60, it might come to test $43.66. With this second key support broken, movement to the downside could continue to $42.56.

Meanwhile, May Brent’s central pivot point is projected at $54.85. The contract will see its first resistance level at $55.78. If breached, it may rise and test $57.14. In case the second key resistance is broken, the European crude benchmark may attempt to advance $58.07.

If Brent penetrates the first key support at $53.49, it could continue down to test $52.56. With the second support broken, downside movement may extend to $51.20 per barrel.