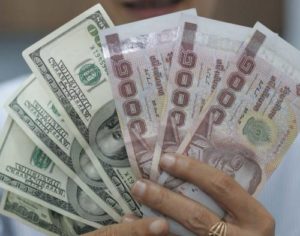 Thailands baht depreciated the most since September 11-th against the US dollar, before the no-confidence debate in parliament today against Prime Minister Yingluck Shinawatra and amid continuing anti-government protests.

Yesterday, demonstrators broke into a building of the Finance Ministry and promise to continue occupying even more government offices, until they force the Prime Minister Yingluck Shinawatra
to resign. The political protests hindered the ministry from selling all of its bonds yesterday, which were meant to support a rice-purchase program. The Thai complicated political situation forced investors to withdraw a net $209 million from Thai bonds and equities yesterday.

Disawat Tiaowvanich, a currency trader at Bangkok Bank Pcl., cited by Bloomberg, said that: “Foreigners were selling Thai assets because of the political concern, but he bigger concern is that the protests will impact tourism, investment and domestic spending. The bias remains for a weaker baht.”

Meanwhile, S&P and Case-Shiller published data regarding home prices in 20 large cities in the United States. In annual terms, prices continued to rise in September, with the corresponding index gaining 13.29%, compared to 12.82% a month ago. Septembers performance of the index outpaced median estimates of analysts, which pointed a 12.82% increase in prices.

The US survey on consumer confidence for November disappointed, as the index, based on survey results, reached a reading of 70.4, coming short of analysts expectations and lower in comparison with last months value of 71.2.