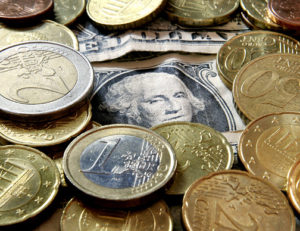 In quarterly terms, the second GDP estimate probably also confirmed the preliminary figure, pointing to a 0.3% growth during the final quarter of last year, according to market expectations. In Q3 economy registered a 0.2% expansion, which came in line with the preliminary growth rate.

According to provisional data published on February 13th, among Eurozone member states, Estonia recorded the highest growth rate (1.1%), followed by Germany (0.7%), Spain (0.7%) and Slovakia (0.6%). Portugal and the Netherlands expanded 0.5% each, French economy grew 0.1%, while Italy showed no growth. Cyprus, Finland and Greece shrank 0.7%, 0.3% and 0.2%, respectively, according to the report by the Eurostat.

The GDP represents the total monetary value of all goods and services produced by the region over a specific period of time. What is more, it is the widest indicator of economic activity in the area. The report on GDP is closely watched by traders, operating in the Foreign Exchange Market, as they will usually look for higher rates of growth as a sign that interest rates will follow the same direction. Higher interest rates will usually attract more investors, willing to purchase assets in the Euro area, while, at the same time, this will increase demand for the single currency. Therefore, in case growth in the common currency zone exceeded expectations, this would certainly provide support to the euro. Eurostat is expected to release the official GDP report at 10:00 GMT.

Employers in all sectors of economy in the United States, excluding the farming industry, probably added 240 000 new jobs in February, according to the median forecast by experts, after a job gain of 257 000 in January. If so, this would be the sixth consecutive month, when employment gains exceeded 200 000. However, the projected figure would be the lowest since August 2014, when 180 000 jobs were added.

The non-farm payrolls report presents the total number of US employees in any business, excluding the following four groups: farm employees, general government employees, employees of non-profit organizations, private household employees. The reading, released most often, varies between 10 000 and as much as 250 000 – 300 000 at times when economy is performing well. Despite the volatility and the possibility of large revisions, the non-farm payrolls indicator presents the most timely and comprehensive reflection of the current economic state. Total non-farm payrolls account for 80% of the workers, who produce the entire Gross Domestic Product of the United States. In case of a lesser-than-expected gain in jobs, the US dollar would certainly see selling pressure.

Average Hourly Earnings probably increased 0.2% in February compared to January, when earnings rose by another 0.5%. The latter has been the largest monthly rate of increase since July 2011, when earnings grew 0.5%.

The civilian labor force expanded by 703 000 in January, while the total number of people unemployed was little changed at 9.0 million. In January the unemployment rate for adult men stood at 5.3%, for adult women at 5.1%, or little changed, while the rate for teenagers increased to 18.8%. The number of long-term unemployed in January (those jobless for 27 weeks or more) was essentially unchanged at 2.8 million, while accounting for 31.5% of the unemployed. The number of persons in part-time employment for economic reasons was essentially unchanged at 6.8 million during the same period, according to the BLS.

The unemployment rate represents the percentage of the eligible work force that is unemployed, but is actively seeking employment. A person who is not classified as employed or unemployed is excluded from the statistics. One counts as unemployed, if he falls in all of the following categories: he/she was unemployed during the last week; he/she is able bodied; he/she has been seeking employment for a period of at least four weeks, which end during the week when the research is conducted. People, who have been laid off and are awaiting to be hired again, are also classified as unemployed. In case the unemployment rate met expectations or even fell further, this would have a bullish effect on the greenback, because of the positive implications for consumer spending. The Bureau of Labor Statistics will release the official employment data at 13:30 GMT.

According to Binary Tribune’s daily analysis, the central pivot point for the pair is at 1.1044. In case EUR/USD manages to breach the first resistance level at 1.1103, it will probably continue up to test 1.1174. In case the second key resistance is broken, the pair will probably attempt to advance to 1.1233.