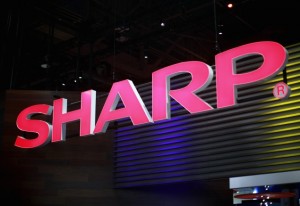 Japans Sharp Corp announced on Monday that its full-year earnings are likely to fall short of expectations due increasing competition in the display industry and the weaker yen.

Sharp, which supplies Apple with screen used in its iPhones, is facing severe competition from Asian rivals who are pressuring overall industry prices down.

The company also said that its profit were hit by the weaker yen, as Sharp produces some electronics outside of Japan, but sells them in its home market. However, liquid-crystal panels are made in Japan.

Sharp is the latest victim of the falling yen, both Sony and Panasonic has said that the weakness in their domestic currency, which fell 14% against the US dollar during 2014, is not good for business.

Some companies are assessing the idea to relocate manufacturing facilities to Japan as a measure to fight the weaker yen. Following the trend Osaka-based Sharp has announced it would withdraw production of certain TVs, refrigerators and air purifiers from China and Malaysia.

Sharps shares fell as much as 8.7% after Japans daily newspaper Nikkei stated that the company is expected to report negative results for its fiscal year.

However, the “report is not based on Sharps announcement” the company said in a statement released later during the day. Although the company said its full-year earnings will not meet its previous estimate of ¥30 billion in net profit, but did not disclose any specific figures.

According to the Nikkei, Sharp is expected to report an operating profit of ¥50 billion for the twelve months to March, or twice as less compared to Sharps current projection.

Investors were hoping the rise of Chinese smartphone manufacturers, like Xiaomi and Lenovo, would support the turnaround strategy of the Japanese company. However, that might not be the case.

Sharp gets around 65% of its display revenue from smaller screens utilized in smartphones and tablets, as the company shifts away its focus from low-margin TV panels.

Rival Japan Display has already released sever profit warnings, projecting a net loss of ¥12 billion. Sharp is due to report its full-year performance on February 3.

According to the Financial Times, the 13 analysts offering 12-month price targets for Sharp have a median target of ¥240, with a high estimate of ¥500 and a low estimate of ¥170. The median estimate represents a -8.73% decrease from the last close price.