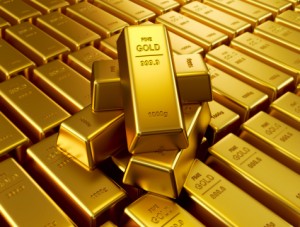 Gold slipped on Wednesday to trade close a 12-week high as a drop in commodities pressured the yellow metal, despite the threat of a US rate hike and weakness in global growth.

Asian equities fell after the World Bank lowered its 2015 global growth projection, citing the failure of stronger US economy and plunging oil prices to offset weaker Eurozone, Japan and China.

The move from the United Nations financial institution led to the largest fall in copper price since 2009.

Additionally, the International Monetary Fund is due to update its view on 2015 global growth next week, in October the organization reduced its previous forecast.

Normally, weaker equities and sluggish global growth support gold prices, however, the strong drops in oil and copper have reversed the positive effects.

“We are giving back some of the gains because of the overall unwinding of positions in commodities,” said a precious metals trader in Sydney, cited by CNBC.

“Gold might push higher, given equities have been volatile, but it will be hard work. In the short term we might squeeze lower to $1,220 before we head back up.”

The yellow metal was traded $3 an ounce higher than the global benchmark on the Shanghai Gold Exchange, down from the $4-$5 premium during the previous session. The reduction came despite increased physical demand from the worlds top consumer ahead of the celebration of the Lunar New Year, when consumers exchange gold gifts.

Assets in the SPDR Gold Trust, the biggest bullion-backed ETF, did not change on Tuesday and remained at 707.82 tons. Changes in holdings typically move gold prices in the same direction.

Adding to the precious metals troubles was a robust dollar, which traded near a nine-year high against the euro amid speculations that the European Central Bank will launch a stimulus program next week at the earliest to fight deflation.

At the same time, gold traders are worried that the Federal Reserve will initiate its first rate hike since 2006 later this year, which will dull demand for the non-interest-bearing metal.

The US dollar index for settlement in March was down 0.24% at 92.280 at 07:51 GMT, holding in a daily range of 92.510-92.280. The US currency gauge gained 0.34% on Tuesday to 92.502. A stronger greenback makes dollar-denominated commodities more expensive for holders of foreign currencies and curbs their appeal as an alternative investment, and vice versa.

According to Binary Tribune’s daily analysis, February gold’s central pivot point on the Comex stands at $1 235.4. If the contract breaks its first resistance level at $1 243.5, next barrier will be at $1 252.5. In case the second key resistance is broken, the precious metal may attempt to advance to $1 260.6.