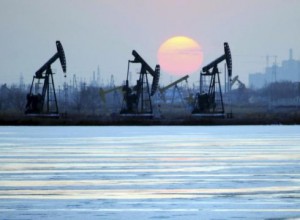 Both West Texas Intermediate and Brent crude fell on Monday after closing at the lowest in more than 5-1/2 years the previous session as Iraq plans to boost exports in January, while Russias output reached a post-Soviet record and the US pumps near the highest level in more than three decades.

Oil prices have more than halved since a June peak as prospects of slowing global economic growth fueled speculations for lower demand that would fail to soak rising supplies as the worlds leading producers pump at the highest rate in decades. The price slump was further exacerbated as the Organization of the Petroleum Exporting Countries, led by Saudi Arabia, entered a stance to defend market share and reached a collective decision on November 27th to maintain the groups current production pace.

According to a Bloomberg survey of analysts, companies and producers, OPEC pumped 122 000 barrels per day of crude less in December from a month earlier. However, at 30.24 million bpd, the oil cartel’s production pace was still above its official target of 30 million bpd.

Mr. Jihad also said that Iraq plans to further boost exports in January to 3.3 million barrels per day after it reached an accord with its semi-autonomous Kurdish region in December over oil exports through Turkey. The agreement would enable the shipment of as much as 550 000 bpd of crude to the Mediterranean port of Ceyhan through a pipeline ran by the Kurdistan Regional Government.

Demand worries were fueled by the latest manufacturing data across the globe which showed lackluster growth in major oil consumers.

Germany’s manufacturing sector grew in December after contracting the previous month, with the corresponding PMI coming in at an expected 51.2, while Spain posted slower-than-projected growth. Italy’s manufacturing activity shrank for a second month and France remained firmly in the contraction zone. The Eurozone as a whole saw its manufacturing gauge jump to 50.6 from 50.1 in November, but trailed projections for an increase to 50.8.

Government data showed on Thursday that China’s manufacturing sector grew at the slowest pace in 18 months, with the official PMI hitting 50.1 from 50.3 in November, while a private gauge earlier in the week slid to 49.6 from 50.0 the previous month. Non-manufacturing PMI inched up to 54.1 from 53.9 in November, China’s National Bureau of Statistics reported.

Moreover, manufacturing in the US cooled in December as well. The Institute for Supply Management’s factory activity index slid to a six-month low of 55.5 from 58.7 in November, underperforming analysts’ expectations for a moderate drop to 57.6. Nevertheless, this was the 19th straight month of expansion for the US manufacturing sector.

In Japan, the Nomura/JMMA Manufacturing PMI for December came in at 52.0, unchanged from a month earlier, compared to projections for a jump to 52.1.

Yusuke Seta, a commodity sales manager at Newedge Japan, said for CNBC: “Oil demand is unlikely be robust this year when we look at the state of economies in China, Japan and Europe.”

A weaker euro helped the dollar to further strengthen, applying downward pressure on commodities priced in it. A strong greenback makes dollar-denominated commodities more expensive for holders of foreign currencies and curbs their appeal as an alternative investment.

Continuing fighting in Libya between Islamist militias and forces of the internationally-recognized government over the control of the countrys eastern ports kept the countrys crude output at 380 000 barrels per day, the state-run National Oil Corp. said. This is only a fraction of total capacity of around 1.5 million bpd. Fighting was reported near Es Sider, the biggest export terminal, even though previous reports showed that the last of burning crude tanks was extinguished after being ignited by rocket fire.

According to Binary Tribune’s daily analysis, West Texas Intermediate February futures’ central pivot point is at $53.28. In case the contract breaches the first resistance level at $54.52, it may rise to $56.36. Should the second key resistance be broken, the US benchmark may attempt to advance $57.60.

If the contract manages to breach the first key support at $51.44, it might come to test $50.20. With this second support broken, movement to the downside could continue to $48.36.

Meanwhile, February Brent’s central pivot point is projected at $56.81. The contract will see its first resistance level at $58.15. If breached, it may rise and test $59.87. In case the second key resistance is broken, the European crude benchmark may attempt to advance $61.21.

If Brent manages to penetrate the S1 level at $55.09, it could continue down to test $53.75. With the second support broken, downside movement may extend to $52.03 per barrel.