Skip to content
Home  »  Stock News   »   Thorntons share price down, loses a third of its value after profit warning 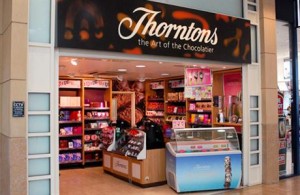 Thorntons Plc announced on Tuesday that its full-year earnings are expected to decrease compared to last years as the British chocolate maker faces difficulties in its UK commercial channel.

The company said it had experienced a “significant reduction” in expected orders from major grocers in the run-up to Christmas. Alfreton, England-based Thorntons, with customers like Tesco and J Sainsbury, also said that grocers began stocking items later than anticipated.

The announcement causes additional worries for the already struggling UK supermarkets. Due to sluggish wage growth, customers have started to avoid large purchases and would rather shop more frequently at a local convenience store.

UK large supermarket have also been losing Christmas customers to companies like Aldi and Lidl. According to researcher Nielsen, the German discounters had nearly twice as big advertising campaigns as Tesco.

Thorntons said it had “significant short-term” problems with its new centralised Derbyshire warehouse, which caused disruption in its supply chain and thus hurt second-quarter and full-year results.

However, the company said that its “warehousing and distribution facility is now working normally” and it will provide improved capacity and quality of service in the future.

For the first quarter, the chocolate maker reported a revenue drop of almost 12%. At the time Thorntons said the decline was mainly because of bad timing of commercial orders and did not change its positive forecast for the full year.

In October the company still remained confident that it will reach its full-year profit target of £9.5 million.

Prior the announcement analysts had projected an edged up pre-tax profit of around £9.9 million for financial year ending in June 2015. Thorntons reported a full-year profit of £7.5 million a year earlier.

“While there has been an overall decline, the performance in the grocers has been mixed with good growth in several of our major partners, yet significant volume decline in some others where prior year sales of high-volume lines have not been repeated,” Thorntons said.