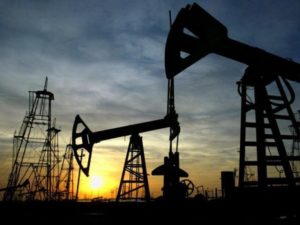 WTI and Brent futures slid towards multi-year lows during midday trade in Europe today, pressured by the rallying dollar, which was boosted by above-par US payrolls figure. Meanwhile, natural gas futures were to the upside, banking on a cooler pattern set for the US.

The key figure on US nonfarm payrolls for September was released today, revealing the US economy had added 248 000 new jobs, compared to expectations of a 215 000 reading, boosting the US dollar to a new four-year peak. Meanwhile, the unemployment rate was logged at a six-year trough at 5.9%, also beating expectations.

On Tuesday crude slumped again, logging the worst day in almost two years, with both benchmarks closing for ~3% loss. Analysts agree that a complex of factors contributed to the slump. A four-year strong dollar, weakening demand outlooks in Europe and China, second- and third-top oil consumers, respectively, rising output from OPEC and technical covering at the end of the quarter were all cited as possible factors.

Natural gas prices slumped Thursday, after the US reported a bigger-than-expected build of natural gas in storage.

“We thought if prices sold off after the EIA report it could turn into a nice buying opportunity with the coming cooler pattern upon us. Today might serve as a good test of this,” analysts at NatGasWeather.com wrote in a note to clients today. “It’s certainly bearish deficits are now less than 399 Bcf, and they will look even more so when another 20-30 Bcf gets whacked off with next week’s huge build.”

While next week’s build will be quite bigger than average, the following reports will post leaner figures, as cooler weather makes due through the northern US. A set of cooler Canadian systems will be tracking in quick succession through the third week of October, with each tapping progressively more of the very cold, Arctic air over northern Canada. While its too early to call Winter, the pattern will provide significant upward pressure on natgas prices.

“Additional weather systems should follow through the third week of October, while likely getting progressively colder and more intimidating,” the analysts at NatGasWeather.com wrote.”We need to keep watching intently to see when these cool blasts turn into cold outbreaks, as we aren’t far off.”