Employers in the US non-farm private sector probably added 230 000 new jobs during July, according to the median estimate by experts, following 281 000 new positions added in June. The employment report by Automated Data Processing Inc. (ADP) is based on data that encompasses 400 000 – 500 000 companies employing over 24 million people, working in the 19 major sectors of the economy. The ADP employment change indicator is calculated in accordance with the same methodology, which the Bureau of Labor Statistics (BLS) uses. Published two days ahead of government’s employment statistics, this report is used by traders as a reliable predictor of the official non-farm payrolls data. Creation of jobs is considered of utmost importance for consumer spending, while the latter is a major driving force behind economic growth. In case expectations were exceeded, this would bolster demand for the US dollar. The official figure is scheduled to be published at 12:15 GMT.

US preliminary annualized Gross Domestic Product (GDP) probably expanded 3.0% during the second quarter of the year, according to the median forecast by experts, following a 2.9% drop in Q1. The GDP represents the total monetary value of all goods and services produced by one nation over a specific period of time. What is more, it is the broadest indicator of a country’s economic activity.

The report on GDP holds a lot of weight for traders, operating in the Foreign Exchange Market. It serves as evidence of growth in a productive economy, or as evidence of contraction in an unproductive one. As a result, currency traders will look for higher rates of growth as a sign that interest rates will follow the same direction. Higher interest rates will attract more investors, willing to purchase assets in the country, while, at the same time, this will increase demand for the national currency.

If an economy is experiencing a robust rate of growth, the benefits will eventually affect the end consumer, because of the increased likelihood of spending, while through increased consumer expenditures economy has the potential to expand even further. Therefore, in case US growth outpaced expectations, this would heighten the appeal of the greenback. The Bureau of Economic Analysis is expected to release the preliminary GDP estimate at 12:30 GMT.

The Federal Open Market Committee (FOMC) will probably keep its benchmark interest rate unchanged within the range 0-0.25% for a 44th consecutive meeting. In addition, the FOMC members will probably reduce the pace of monthly asset purchases by another $10 billion to $25 billion, according to the median forecast by experts.

Investors and traders keep a close eye on the FOMC’s rate decisions. After each of the eight FOMC meetings, an announcement is made regarding the Fed’s decision to increase, decrease or maintain the cash fund rate.

According to MarketWatch, at today’s meeting the Federal Reserve may introduce hints as to when it intends to raise interest rates for the first time in a while, as the bank has been moving towards the exit of the third round of its Quantitative Easing (QE3) since the policy meeting in December 2013. 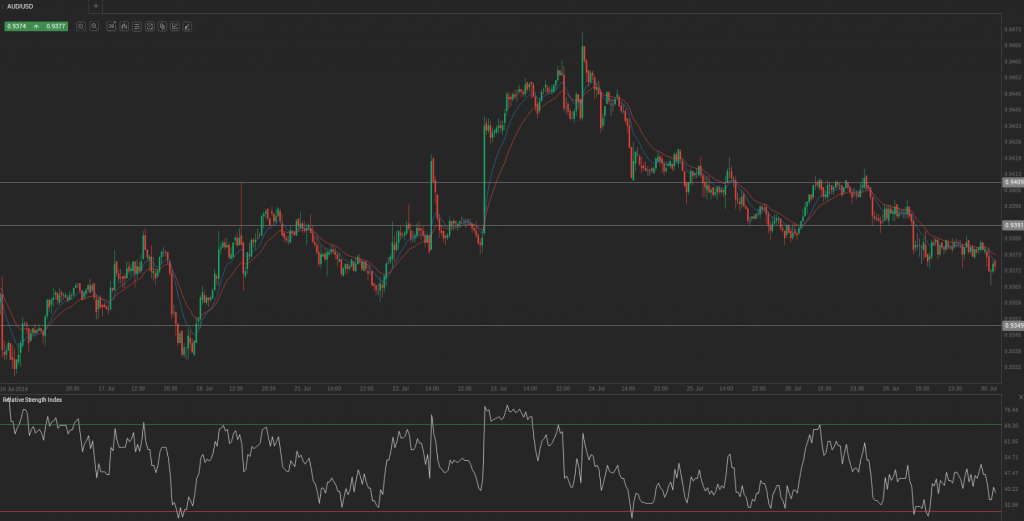 According to Binary Tribune’s daily analysis, the central pivot point for the pair is at 0.9391. In case AUD/USD manages to breach the first resistance level at 0.9409, it will probably continue up to test 0.9433. In case the second key resistance is broken, the pair will probably attempt to advance to 0.9451.