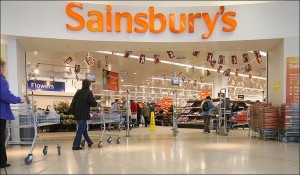 J Sainsbury Plc reiterated its forecast that its same-store sales growth will resume later this year, as the company deals with price reductions made by its competitors by concentrating on fresh produce and premium own-brand food.

Mr. Justin King, who is the departing Chief Executive Officer of the company said in its statement that was cited by the Wall Street Journal: “Lower food price inflation and reduced fuel prices are a welcome respite to customers finances but they continue to spend cautiously, leading to industry growth in the quarter being the slowest in a decade.”

As reported by the Financial Times, Mr. King also added: “It’s a phoney war on announcements perhaps,” he said. “But . . . prices are part of the battleground. These things do tend to wax and wane. There is no doubt there is a price skirmish going on as we speak.”

The sales update comes at a time when the grocery market is undergoing through deceleration, which is considered the largest one since more than a decade. J Sainsbury Plc, however, is confident it will continue to perform better than most of the industry for the remaining months of 2014. As reported by Bloomberg, outgoing Chief Executive Officer King said on a conference call with reporters: “Our pricing positioning is the strongest its ever been.”