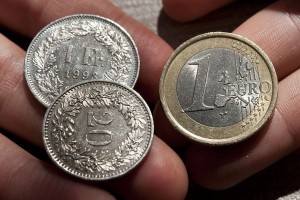 The surplus on Euro zones seasonally adjusted current account probably narrowed to 18.4 billion EUR in January, according to the median estimate of experts. In December the surplus figure was 21.3 billion EUR. The official numbers are to be released at 9:00 GMT.

Meanwhile, the preliminary value of the compound index of economic sentiment (ESI) for the Euro zone probably improved to a reading of -12.3 during the current month from -12.7 in February. The European Commission is expected to publish the preliminary data at 15:00 GMT. This survey precedes the final reading by two weeks. A larger than projected improvement in the index would provide support to the single currency.

According to Binary Tribune’s daily analysis, in case EUR/CHF manages to breach the first resistance level at 1.2197, it will probably continue up to test 1.2221. In case the second key resistance is broken, the pair will probably attempt to advance to 1.2237.