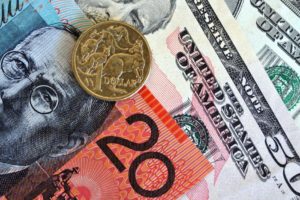 Australian dollar traded close to highs unseen in three months against its US counterpart on Friday and was poised for a weekly gain, following a series of optimistic economic data, released earlier in the week, while the Reserve Bank of Australia may consider a verbal intervention in order to curb further strength.

AUD/USD rose to a session high at 0.9109 during the early phase of Asian trade, while at 7:22 GMT the pair was trading little changed at 0.9088, dipping a mere 0.02% for the day. Yesterday it touched 0.9113, which has been the highest level since December 11th. The Australian currency has appreciated 1.84% during the first week of March, following another 1.9% advance in February, which has been the largest gain in the past five months. Support was likely to be found at psychological level of 0.9000, while resistance was to be met at December 11th high, 0.9152.

In a statement earlier on Friday Reserve Bank of Australia Governor Glenn Stevens said that the exchange rate of the Aussie was high by historical standards, something which has been noted in banks policy statement from its meeting on March 4th.

The Australian dollar recorded gains in February, after the central bank indicated a period of steady interest rates and its intention not to verbally influence the exchange rate of the national currency. In the current month the Aussie continued its advance, despite Stevens remarks of currencys strength. Today he also said that an exchange rate of the Aussie above 90 US cents exceeded central banks estimate.

“The RBA has boxed itself in now since ramping up verbal intervention after the August cut,” said Annette Beacher, head of Asia-Pacific research at TD Securities Inc. in Singapore, cited by Bloomberg News. “If they don’t talk it down, it will go to the moon.”

“The RBA has undercut its efforts at verbal intervention by shifting to a neutral bias on rates,” Todd Elmer, currency strategist at Citigroup Inc. in Singapore, wrote in an e-mailed note to clients on March 4th, as reported by the same media. “By removing the threat of lower interest rates, there is less reason for investors to take RBA rhetoric on FX seriously, because this is the most powerful tool at policy makers’ disposal for impacting the exchange rate.”

The yield on Australian benchmark 10-year government bonds climbed to 4.18%, or the highest level since February 25th, while the yield on nations 3-year bonds rose three basis points, or 0.03 percentage point, to reach 2.96%.

Yesterday a report made it clear that Australia’s trade balance produced the widest surplus since August 2011, supported by iron ore and gold export. Exports surpassed imports by 1.433 billion AUD in January, following a revised up surplus figure of 0.591 billion AUD during the preceding month (0.468 billion AUD previously). Preliminary estimates pointed to a considerably lesser trade surplus in January, amounting to 0.100 billion AUD.

At the same time, yesterday a separate report revealed that retail sales in the country rose at a monthly pace of 1.2% in January, or the fastest rate in the past 11 months and also outperforming forecasts of a 0.4% gain. Sales have been supported by higher spending at universal stores and restaurants. In December the value of the retail sales index has been revised up to a gain of 0.7% from a gain of 0.5% previously.

On Wednesday the Australian Bureau of Statistics reported that nation’s Gross Domestic Product climbed 0.8% in the final quarter of 2013 compared to the prior quarter, beating experts’ estimates pointing to a 0.7% increase, while in Q3 compared to Q2 economy expanded 0.6%. The annualized GDP rose 2.8% during Q4, again above forecasts of a 2.5% gain.

Meanwhile, in the United States, non-farm payrolls probably rose by 146 000 in February, according to the median forecast of experts, after in January economy added 113 000 jobs. The rate of unemployment in the country is expected to remain steady at 6.6%, or the lowest level since October 2008. The official numbers are expected to be released at 13:30 GMT.