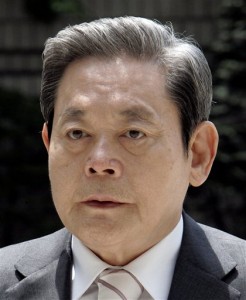 The Chairman of Samsung Electronics Co. – Lee Kun Hee pushed the employees of the company to adopt some new ways of thinking and try to shift their focus on hardware, which he believes would give the company, which is considered the worlds biggest smartphone and televisions manufacturer, the opportunity to maintain its growth.

Here is what Mr. Lee said according to e-mailed notes from the company: “We have to change once again. We must give a bigger push for innovations, including in business structure, so that we can lead industry trends.” Chairman Lee also said that the company should create some new businesses by integrating technologies from different industries. This statement comes only a day after the Motorola Mobility unit of Google Inc. reduced the Moto X flagship handsets price to 399 dollars on any U.S. Carrier without a contract, as reported by Bloomberg earlier.

2013 was the year when Samsung managed to ship a record number of handsets, which resulted in posting the companys highest quarterly earnings. Samsung Electronics shares experienced their first annual decline in the last five years.

The company was also forced to face Apple Inc.s competition amid some signs of slowing growth in high-end handsets. When it comes to TVs, Samsung also faced the competition of some Japanese and Chinese TV sets manufacturers. The rivalry between the company and some smaller Korean makers, such as SK Hynix Inc. is also becoming more fierce on the chips market. The constantly dropping handsets prices are one of the reasons why Samsung, which is based in South Korea and is also considered the biggest memory chips and flat-panel displays manufacturer, is becoming more focused on cheaper devices in emerging markets.

In 2013 Samsung also had some serious patent battles with its most serious rival – Apple Inc. on four continents. The Chairman of Samsung Electronics Co. also explained: “Our leading businesses are constantly being chased by competitors, while time is running out for our less-competitive businesses. Last year, we engaged in do-or-die battles with companies around the world and endured patent wars in light of market slowdown and prolonged, weak global economic growth.”

Samsung Electronics is expected to release its preliminary earnings on January the 7th 2014. Bloomberg announced that the the companys full-year operating income is estimated to 37 billion dollars in 2013 by 40 analysts.

According to Bloomberg, the current share price of Samsung electronics Co Ltd is 0.99% down, and its one-year return rate is 15.98% down.