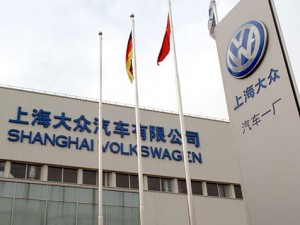 Both companies, Volkswagen AG and General Motors are surpassing their targets to deliver more than 3 million automobiles in China this year.

The German automaker is pointed to sell more vehicles in China than General Motors Co. for the first time in nine years, regaining its place as the biggest foreign carmaker in the world’s largest auto market. The German automaker held a lead of about 70,000 vehicles through the first 11 months, according to data from the automakers.

Competition is set to intensify between the top European and American automakers, which are investing heavily in China market even as more of the nation’s cities consider vehicle restrictions to cut pollution. Toyota Motor Corp., still recovering from a consumer backlash, was outsold by Ford Motor Co. in the country this year.

“China is the big battleground,” said Klaus Paur, Shanghai-based global head of automotive at market researcher Ipsos. “At the same time, there’s a risk of an over-dependence on the Chinese market. As long as this is all working well, it’s wonderful but if something gets in the way, then the exposure to risk is even bigger.” he added, cited by Bloomberg.

Volkswagen said last month that it will invest 18.2 billion euros ($25 billion) through 2018 to expand in China. In the first 11 months of this year, the Wolfsburg, Germany-based automaker boosted sales by 17% to 2.96 million vehicles, with its brand accounting for almost 80% of the deliveries.

GM plans to introduce four new Chevrolet models in China next year, according to John Stadwick, a vice president of sales and marketing. A lack of new models has hampered the growth of the brand, which has lagged behind the industry average this year.

Industrywide, total sales of vehicles reached 19.9 million units this year through November, which would make China to be the first country to surpass 20 million units in annual vehicle sales.

Among the new competitors, Tata Motors Jaguar Land Rover sales gained 28% in the first 11 months of this year to 83,499 vehicles on demand for the Range Rover Sport and Evoque SUVs. The England-based company is set to start producing cars in China next year, allowing it to avoid the nation’s 25 percent import duty.

Fiat SpA is negotiating to produce Jeep vehicles in China after production stopped in 2006.

Volvo Car Group, owned by Zhejiang Geely Holding Group Co., posted a 45% gain in sales this year and expects sales next year to be strong with the production of the S60L sedan in China since November, said Lars Danielson, the company’s senior vice president.

Japanese carmakers have seen their market share in China rebound to 19% in November from 13% in January, after increasing incentives to win back sales lost to a backlash over a territorial dispute between the two countries, according to the China Association of Automobile Manufacturers.