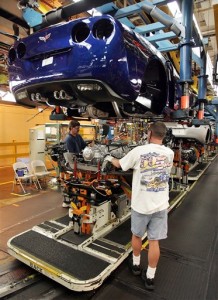 General Motors Co., or the company recently called “Government Motors” because of the huge help it received from US Government, is officially free from U.S. taxpayer ownership, signaling the domestic auto industry’s rebound from the deepest downturn since the Great Depression.

Bailouts from the George W. Bush and Barack Obama administrations helped GM avoid liquidation and reorganize in a 2009 bankruptcy that has given new life to the company.

“This marks one of the final chapters in the administration’s efforts to protect the broader economy by providing support for the automobile industry,” Treasury Secretary Jacob J. Lew told reporters yesterday in a conference call.

A possible at the time automobile-industry shutdown from a liquidation of GM and Chrysler would have cut 2.63 million jobs from the U.S. economy in 2009, according to a study by the Center for Automotive Research. The bailout saved or avoided the loss of $105 billion in transfer payments and the loss of personal and social insurance tax collection in 2009 and 2010, according to CAR.

GM is being helped by having quality products, bringing out 18 new or refreshed cars and trucks this year and 14 next year. It’s part of GM’s effort to transform its lineup into one of the industry’s newest from among the oldest as the auto maker is enjoying its “second life” according to the critics in the industry.

Those new products are winning some rave reviews. The Chevrolet Impala was the first U.S. car chosen as the best sedan on the market by Consumer Reports, a first in at least 20 years, and the Cadillac CTS was picked as Motor Trend’s car of the year.

“This has been a long, hard road,” Mark Reuss, president of GM North America, told reporters yesterday before the Treasury’s announcement. The benefit from shedding government ownership could come immediately, he said. “I think probably some people will begin to consider us right away, maybe the next day.”

GM closed at a record high of $40.90 yesterday. The automaker’s shares soared 42% this year through yesterday, outpacing the 27% gain of the Standard & Poor’s 500 index.