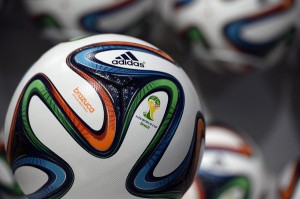 The two giants in sport equipment, Nike and Adidas, are preparing themselves for an advertising war for the upcoming World Cup in Brazil next year.

“Its not easy to evaluate (next years) collections. Adidas is definitely putting a lot of effort into winning lost ground, but a company like Nike wont rest on its laurels,” said to Reuters, Hans Allmendinger, head of marketing for German sporting goods retailer Sport2000.

Adidas has a strong appeal in the soccer department built for more than 40 years of releasing top quality products. It has strong partnerships setting it up well for the coming challenge: a close relationship with German club Bayern Munich, of which it owns 9%, and with FIFA, soccers world governing body, for whom it designs official World Cup kit.

Unlike its main competitor, Nike only entered the soccer market in 1994. It already managed to seal several major partnerships with clubs, including English champions Manchester United.

Retailers say Nike brand has gained market share this year thanks to well designed, comfortable products such as the top-selling Nike Free sneaker – and attracting top stars in advertising in orderto improve the image of the company.

Adidas has done the same. One of the ways the German brand is hoping to lift sales up is by using the cushioning technology in its Boost running shoes for other categories such as basketball. That could enable it to increase sales of Boost shoes to 15 million pairs in 2015, after having only introduced the line earlier this year.

“We believe we can grow the business by launching a lot of new innovative products. Our pipeline of new products is full.” said Adidas chief executive Herbert Hainer.

Adidas has projected record 2014 soccer sales of over 2 billion euros and aims to boost group sales to 17 billion euros ($23 billion) in 2015.

Nike seems to be stepping up with producing more brand awareness as the sports retailer has almost 2.5 million Twitter followers to just over 570,000 for Adidas. It also has higher Facebook engagement rates, showing its fans interact better than Adidas fans with posted content.

However that may change, as Adidas CEO Hainer said this week that the company would shift “much more money” into digital and social media to increase the brand image especially in regions outside Europe.

Adidas shares added 0.7% in Germany on Friday while being up more than 35% this year.