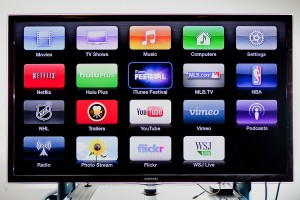 We have been all waiting for the moment when television will become what we call “revolutionary”. Probably all gadget fans eagerly expect things such as screen personalization, voice recognition and great choice of TV programs, shows and other video services provided by various devices.

These were obviously the plans of Apple, or at least this is what we thought after Steve Jobs interview with Walter Isaacson in 2011. A couple of years ago the information technology magnate surprisingly announced that he had succeeded to “crack” the perfect TV user interface.

However, instead of Apple TV, the rave reviews were given for the new Xbox One console of Microsoft, which offers not only vast gaming options, but also fantastic media-centre capabilities. This is so far the only device, which has provided users with revolutionary and interactive TV experience thanks to its voice navigation features.

On the other hand, Apples intentions of creating a new TV product on the market seemed rather obvious, after an announce made a year ago by the chief executive of the company – Tim Cook. After all, Apple is considered the leading company in the field, but it is now quite possible to be left behind by its competitors.

For example, Google has released its Chromecast at the price of $35, which works with most devices running Google Chrome web browser. In addition, the device provides users with the opportunity to transfer information from a smaller screen to a bigger one. This feature is also launched by Sonys PlayStation 4 and Xbox One. Samsung is also trying to offer its customers the best and most innovative features and devices. Of course, Apple has its own alternative thanks to its Airplay feature. The only problem is Airplay is much more expensive than its rival devices and in the same time offers much less variety of options due to the fact it can only be used with other Apples devices.

All this literally “shifts” Apple from the first place and puts it in the TV sidelines, while companies such as Microsoft, Google and Samsung become more and more successful on the market. The outcome is quite obscure and we are still about to find out if Apple will manage to improve its positions, or will continue to try catching up with its competition.

Dan Cryan, who is a digital media analyst at IHS said: “A more advanced living room play is beginning to look like a growing opportunity for Apple. The rest of the market has moved on a lot.” On the other hand, for almost two years now there have been some hits dropped by the Apples executives, who made it clear they are planning to hit the TV market with something revolutionary and innovative. Unfortunately, the company is still left behind its competition, although its set-top box has acquired a lot of new TV channels, such as HBO Go, Sky News, ESPN and the NFL.

Both users and analysts are still about to find out what follows and what Apples next move will be.

Apples share price rose 2.35% on November 27 at market close while it advanced 2.6% on a year to date basis. The 47 analysts, polled by CNN Money, offering 12-month price forecasts for Apple Inc have a median target of 590.00, with a high estimate of 777.00 and a low estimate of 360.00. The median estimate represents a 8.07% increase from the last price of 545.96. The consensus polled investment analysts is to buy stock in Apple Inc.