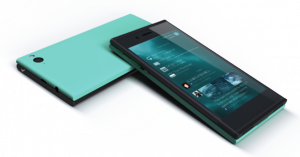 Jolla Oy, a freshly founded Finnish smartphone maker formed by Nokia Oyj engineers, is stepping up its challenge to iOS and Android OS after its first handsets attracted vast interest from consumers looking for change.

The Jolla phone costs 399 euros ($542) stripped of wireless-carrier subsidies. The company received pre-orders from 136 countries and plans to start selling devices in the rest of Europe and China in 2014.

“This is a product where our company can introduce our idealistic views on how we believe the mobile phone should be,” Antti Saarnio, Jolla’s chairman and co-founder, said in an interview. “On the business side, we’re dead serious. With our own phone and our partners’ phones combined, we’re expecting to sell millions of phones.”

The operating system named Sailfish, which is based on the MeeGo software that was abandoned by Nokia after its switch to Microsoft Corp.’s Windows Phone. The main advantage of the platform is its ability to run several applications at the same time, said Henri Huttunen who was the first person to buy a Jolla smartphone yesterday.

The smartphone’s touch screen looks different from those of Android and Apple devices, and functions are controlled in a unique way, according to Bloomberg.

To escape from having to deal with creating its own applications from the start, Jolla made the phone compatible with Android apps sold through Yandex NV, a Russian rival to Google. Nevertheless, attracting software developers and building up a competitive app pool for Sailfish stays a challenge.

Jolla joins Microsoft in an attempt to end the dominance of Google and Apple, whose operating systems ran more than 90% of the world’s smartphones in the third quarter, according to research firm IDC.

“It seems unlikely” Jolla would sell “huge volumes,” said Richard Windsor, an independent analyst at Radio Free Mobile. “It’s a showpiece to show what the platform is capable of. The biggest thing that theyve got is the user experience theyve built, the interface.”