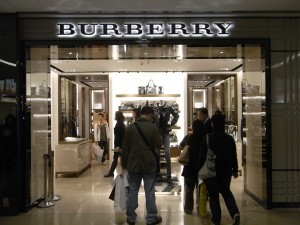 The largest luxury-goods maker in the United Kingdom – Burberry Group Plc – made an announcement that it is going to appeal the Chinese regulators decision for restricting the companys hallmark trademark for leather goods, which is the famous check pattern design. The company made an online statement that the decision of the Chinese regulator will not be taken into account before there is a decision made on the appeal. This means that until then Burberrys use of its official leather trademark will not be changed.

Corbett Wall, who is a +CW Associates managing partner, based in Shanghai said: “In China, its been very difficult traditionally for major companies to protect their brand. The whole idea of intellectual property is still at its beginning stages.” On the other hand, Burberry expressed confidence that its appeal against Chinese regulators leather goods restrictions will be successful. The company had a similar problem in Hong Kong in the past, when it won a a lawsuit against Polo Santa Roberta Ltd. The case was about some check pattern designs.

As we have already said, the problems Burberry is currently facing, are not something new. Other world-famous companies and even some celebrities have experienced such unpleasant situations in the past, too.

History remembers some even more striking cases. In May 2009 the major yoghurt maker in the world – Danone – lost a Chinese appeal over the ownership of the Wahaha trademark. The lawsuit was arose by Danone against Hangzhou Wahaha for violation of a joint venture agreement. Michael Jordan is also one of the celebrities, who had legal battles with China-based companies. In February 2012 he sued Qiaodan Sports Co. for using his name written in Chinese, as well as his number “23” without asking for permission.

All this comes here to prove that even some of the major companies worldwide, who have been in a certain industry for years are not immune against such situations and are obviously facing some unexpected difficulties in China. Some local institutions, such as the National Development and Reform Commission, has started investigating an anti-monopoly law, but no one can really say what the outcome will be.

In the current case, we must be honest and admit that China has become a country of grave importance to most luxury brands located worldwide. Burberry alone gets about 39% of its annual revenue from this region, mostly because of the fact that local consumers are proved to be the luxury goods biggest buyers globally.