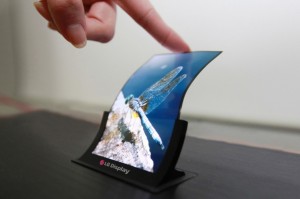 Samsung and LG are testing curved screens for mobile phones and wearable devices. The South Korean companies are competing against each other to deliver flexible displays to their mobile devices. Success in doing so could give them a significant advantage over Apple, Google and other makers of wearable devices in a segment that is shaping up to be the next battleground in consumer electronics.

Samsung announced the so called Galaxy Round, a phone that features curved screen. The news was shortly followed by LG’s announcement of the G Flex, which in contrast to Samsungs handset is deeply curved on a horizontal axis. Both handsets are currently only made for Korean market.

Skeptics have argued that the new feature solves a problem before it has occurred.

“From a usability point of view, they dont really give much … Perhaps [in the case of Samsung’s vertically curved Galaxy Round] it will curve around your leg, but I don’t think that really stands up as a main feature.” commented for The Verge, Matthew Cockerill, associate design director at Seymourpowell.

The LGs G Flex is perhaps the more attractive of the two handsets with a larger distance to curve, it looks different compared to most smartphones. LG is marketing the product as “a good fit for the face”. However, while the claims of ergonomic calling could be true, the phone could be inconvenient to operate on, while not talking.

“The smartphone market is increasingly saturated so it is getting difficult for us to make a step forward,” Ma Chang-min, LG’s head of domestic marketing, said. “Curved display is the future technology, which will evolve into wearable displays.”

On the other side flexible displays would allow for completely new forms of gadgets such as smartwatches or bracelets that wrap around the wrist, or tablet computers that can be rolled up and even folded to fit into pockets.

With development of curved screen technology Samsung and LG should face an important strategic decision: whether or not to supply flexible screens to other companies, especially concerning Apple. Analysts expect Samsung to keep flexible displays for itself, given the fact that the new panels will play a key role in its efforts to differentiate its products. But they say LG is likely to supply flexible displays to Apple.

Both companies are heavily investing in OLED display technology, which is used in smartphones from Samsung, LG, Motorola, and others. The investments are finally repaying for the smartphone giants though they should add much more funds to see the full potential of the technology. But with the industry consensus forming around flexible displays as the next big area for technological breakthroughs, few doubt that the investment would pay off in the long run.