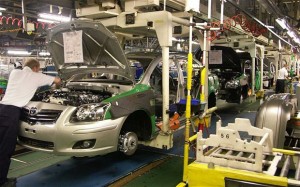 Chinese auto industry demand, contrary to global financial crisis in the global markets, kept expanding, accounting for one-third of the industry’s total growth over the period of five years between 2008 and 2013.

Last year, annual sales of passenger cars and minivans remained, 9% and 14% below their pre-crisis peaks in the US and Western Europe, and recovered to 2007 levels in Japan, according to automotive consultancy firm Alix Partners. Meanwhile, sales in China’s market more than doubled to 18.6 million, growing to the world’s largest.

According to many analysts Chinese auto market didnt feel the crisis. Even more, the market in the worlds second largest economy rose significantly in 2009 and 2010.

Toyota and Honda missed this opportunity. Together with Nissan, the “big three” Japanese auto companies’ combined share of the China market dipped from more than one-quarter to just 15% in the first half of this year. One of the main reasons for Japanese companies retreating is the political tension between the two largest Asian economies.

A series of industrial changes in 2010 that put to an end China’s cheap-labor advantage also affected Japanese car plants in southern China. The striking auto workers drew on lingering resentment over their country’s former wartime adversary.

Toyota’s vehicle sales dropped rapidly, with many customers cancelling orders and shunning showrooms. It was forced to reduce production temporarily in some plants by as much as 60%.

Toyota’s sales this September rose 45% year-on-year, according to market research consultancy firm LMC Automotive, while Honda and Nissan’s China business doubled. But all three companies’ sales over the first three quarters of 2013 remained largely flat or slightly down versus the same period last year, even as the overall market grew a robust 15%.

Toyota enjoyed the year 2008 in China, attaining a 10% market share and becoming the country’s second-best-selling brand after Volkswagen. However, when the global financial crisis hit markets, it froze development of a major plant in Changchun, a northeastern industrial center, and delayed approval for capacity increases at other facilities, failing to profit from Chinese favorable market conditions. One Toyota executive admitted that company never seen Chinese market to be untouched from the crisis.

Toyota and Honda have learned from their mistakes and can recover sales in China, although it will be a difficult task according to some analysts, as the market is now far more competitive. More than 100 manufacturers are active in China including every major multinational car company.