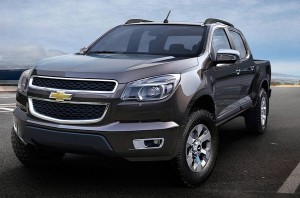 The auto maker presented its Chevrolet Colorado midsize pickup truck today at the 2013 LA Auto Show, the first in a long-term strategy designed to challenge Toyota and its Tacoma pickup, which has been a hit with young truck buyers since its introduction more than a decade ago.

GM executives target the new trucks toward two distinct audiences: commercial buyers who need to haul equipment and lifestyle users who choose it for recreation and light hauling.

“We honestly believe for all the research weve done, there’s a lot of people looking for midsize,” said Alan Batey, senior vice president of Chevrolet.

It is a risky bet for GM, given that the auto maker has invested more than $500 million to design the Colorado and the midsize market has been continually shrinking since 2008. Midsize pickups—which traditionally provide less towing capacity but more fuel efficiency—accounted for just 1.6% of overall U.S. automotive sales year to date through the end of September, according to research firm IHS Automotive. That is down from 3.2% for the same time period in 2008. GMs 2009 bankruptcy disrupted the Colorado and Canyon lifeline, leaving both models to be phased out in the U.S. in August 2012.

“The question is will there be enough volume for GM,” said to Wall Street Journal IHS Automotive analyst Tom Libby. “They have to win away customers from Toyota, they have to win away customers from Nissan, and then the segment has to grow. Its going to be difficult especially when customers come in and figure out that for a few dollars more a month they can get a large pickup truck.”
This opened a window of opportunity for Toyotas Tacoma to boost its dominance in the US. The pickup truck is expected to take about 65% of the roughly 230,000 midsize pickup trucks that will be sold this year, according to IHS.

“Tacoma has carved out a niche with the American buying public because of its sportiness, rugged utility and best-in-class resale value,” Toyota spokesman Curt McAllister said, cited by Wall Street Journal. “We expect the truck to easily eclipse 150,000 sales by the end of the year.”

It looks like a fierce competition is starting to build up between the three top pick-up truck brands in US. The ahead start of Toyota and Nissan is giving them the desired advantage over GM before new models have been compared by auto critics.

The 14 analysts asked by CNN Money offering 12-month price forecasts for General Motors Co have a median target of 48.50, with a high estimate of 56.00 and a low estimate of 39.00. The median estimate represents a 27.60% increase from the last price of 38.01. They have rated the car-makers stock as a “buy”.

Shares of GM have risen by more than 30% this year.