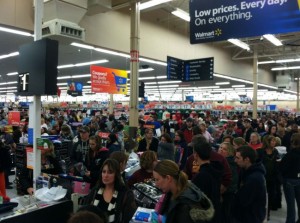 US retailers are making big discounts earlier than ever as predictions of the slowest holiday shopping season since 2009 may be underway.

Wal-mart, the worlds biggest retailer is deeply concerned over the upcoming shopping season, thus the company is already piling on fresh discounts. For example the top retailer is slashing the price a 32-inch flat-screen TV to $98, down from $148 last year.

Regarding economic conditions and a shorter holiday season, retailers are piling on deals as they try to attract for market share during the most important sales period of the year. For the fourth year in a row, disposable incomes in 2013 have only inched up. As result, low-income Americans will again have a less-merry season than affluent consumers, who are more flush thanks in part to a 26% rise in the Standard & Poor’s 500 Index this year.

“We will be seeing promotions significantly above the current 30% off, which are the opening table stakes,” said to Bloomberg, Craig Johnson, president of Customer Growth Partners, a New Canaan, Connecticut-based consulting firm. “Stores have too much inventory, which doesnt bode well for 2014.”

As shoppers are expected to visit fewer stores this holiday, sales are projected to advance 2.4%, the smallest increase since the year the recession ended, according to ShopperTrak, the Chicago-based researcher. Sales from Black Friday through Cyber Monday are projected to rise 2.2% year-over-year, researcher IBISWorld said yesterday.

“The consumer is more deal-driven than ever,” Ken Perkins, president of researcher Retail Metrics LLC, wrote in a Nov. 14 note. “Discretionary dollars for holiday spending are limited for the large pool of lower- and moderate-income consumers due to lack of wage gains this year coupled with the increased payroll tax.”

Wal-Mart, which has projected stagnant US comparable sales for the rest of the year and vowed to be aggressive with its promotions, stepped up on November 1 with its earliest-ever holiday deals.

The 21 analysts polled by CNN Money offering 12-month price forecasts for Wal-Mart Stores Inc have a median target of 82.00, with a high estimate of 90.00 and a low estimate of 75.00. The median estimate represents a 3.48% increase from the last price of 79.24. Analyst advise to hold the stock.