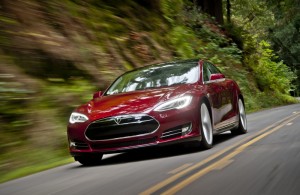 The U.S. National Highway Traffic Safety Administration announced the probe today in website post, saying it would look into the fire risks from the undercarriages striking objects. The probe involves 13,108 Model S vehicles.

US safety regulator is investigating Tesla Motors’ Model S electric car after a series of fire accidents, in a step that could lead to a recall of the company’s flagship model. Strong sales of “the safest car in America,” has transformed the car-maker from ambitious upstart to investor top stock. However, three battery fires over the past five weeks have stopped the ambitious rise in its share price.

In announcing the probe, NHTSA said both US incidents led to thermal runaway, a phenomenon found in the lithium-ion batteries on Boeing 787 Dreamliners that led to the plane’s grounding earlier this year.

Tesla Chief Executive Officer Elon Musk, who last week said “there’s definitely not going to be a recall,” said in a blog post hours before the filing that the company sought the probe to counter “false perceptions” about the car’s safety.

“While we think it is highly unlikely, if something is discovered that would result in a material improvement in occupant fire safety, we will immediately apply that change to new cars and offer it as a free retrofit to all existing cars,” Musk wrote in the blog post.

Since, the day of the first fire, shares in the car-maker have fallen 37% on worries of an investigation, recall, below-expectation sales numbers and comments from chief executive Elon Musk suggesting the company was overvalued.

According to Teslas CEO the world is faced with more important issues while the electric technology has been misinterpreted, Elon Musk emphasized on the need of sustainable transportation in order to diminish the risk of global climate changes.