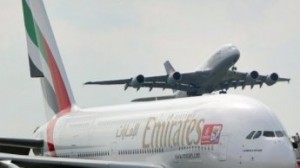 Boeing Co. and Airbus SAS executives took part in the Dubai Air Show for business along with the three largest Middle East airlines on the first day. The two aircraft giants succeeded in breaking records in the process. Boeing secured $101.5 billion in transactions for its biggest-ever deal by value, while Airbus pulled in its largest super-jumbo order yet.

Emirates Airlines, the fast-growing Dubai-based carrier, led the way by making a commitment to buy 150 Boeing 777X long-range jets in a deal that may become the US manufacturer’s largest single commercial aircraft order, worth $55.6 billion at regular price. However, the Gulf carrier is expected to secure significant discounts on the proposed aircraft purchases, particularly in relation to the 777X, because it will be a new jet.

Emirates argued it needs the planes to sustain growth of at least 18%. Emirates and its regional rivals rely on feeder traffic to push millions of passengers through their hubs and on to global routes that connect most destinations with a single stop in the Middle East. Emirates, has also provided a much-needed boost for Airbus by agreeing to buy 50 additional A380 super-jumbos.

“We’re in a global recession and we’re still growing at 20%,” Emirates President Tim Clark said, cited by Bloomberg. “As we can see the market responding to what we do on a global basis, there is no cap yet that we can see.”

Airbus has not secured any orders for the A380 so far this year, as the company blamed the economic downturn for the decreased demand. Now the European manufacturer is hoping Emirates’ commitment will be monetized into a contract shortly.

Dubai is holding this year’s air show at the new Al Maktoum airport, situated in the desert halfway between the skyscrapers of Dubai and Abu Dhabi that will eventually replace the existing airfield as the main hub.

Boeing shares rose 0.6% on Friday while being up more than 80% year-to-date. The 22 analysts polled by CNN Money offering 12-month price forecasts for Boeing Co have a median target of 142.00, with a high estimate of 175.00 and a low estimate of 124.00. The median estimate represents a 4.35% increase from the last price of 136.08. EADS (European Aeronautic Defence and Space Co.) gained 3% on Friday also being more than 80% up this year.