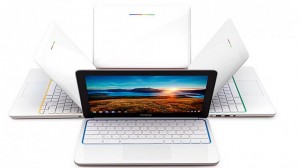 Google and Hewlett-Packard are halting sales of their recently released Chromebook 11 computer after several users reports saying the device’s charger has been overheating.

The precautionary measure announced this week comes 5 weeks after Google and Hewlett-Packard unveiled the Chromebook 11 as a budget-friendly alternative to laptop computers with similar features. The Chromebook has a display screen of 11.6 inches diagonally and sells for around $280.

Consumers have been advised to stop using the charger offered with the laptop and purchase another one.

“Customers who have purchased an HP Chromebook 11 should not use the original charger provided with the product. In the interim they may continue using their HP Chromebook 11 with any other Underwriters Laboratories-listed micro-USB charger, for example one provided with a tablet or smartphone. We apologize for the inconvenience.” a spokesperson from HP said to The Verge.

Google product management vice-president Caesar Sengupta said that retailers are stopping sales of the HP Chromebook 11 after receiving a “small number of complaints” that chargers included with the device have been overheating and may damage the product.

“We are working with the Consumer Product Safety Commission to identify the appropriate corrective action, and will provide additional information and instructions as soon as we can,” Sengupta said.

Chromebooks run Google’s Chrome operating system, as emphasizing on web browsing, video and the company’s online software for word processing. Google has been adding new manufacturing partners as demand rises for the laptops. The devices owns 3.3% of the market for back-to-school shoppers in the U.S. between June 30 and Sept. 7, up from zero a year earlier, according to the NPD Group.

HP slumped more than 5% after the news, while Google shares seemed almost unaffected.

The 23 analysts polled by CNN Money offering 12-month price forecasts for Hewlett-Packard Co have a median target of $25, with a high estimate of $32 and a low estimate of $16. The median estimate represents a 0.83% decrease from the last price of 25.21. Analysts advise to hold shares of HP.