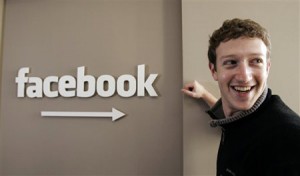 Companys CFO assured yesterday on a conference call that news feed ads wont increase significantly. After shareholder meetings earlier this year CEO Mark Zuckerberg was pressed to raise the profitability of the worlds largest social network. The site has been building tools especially for advertisers for an easier access to consumers. Zuckerberg is aiming to find the balance between optimal amount of ads on the site and the point where users are annoyed by the messages.

“It’s a fine line,” said to Bloomberg, Brian Wieser, an analyst at Pivotal Research Group in New York who has a hold rating for the shares. “They want to manage the user experience. They don’t want to overwhelm consumers’ use of Facebook with advertising.”

Profit, excluding some items, was 25 cents a share, the company said in a statement yesterday, compared with analysts’ average prediction for 19 cents. Net income was $425 million, or 17 cents a share, as the social-networking service continued to invest in equipment, staff and services. That proves a great shift in the companys ability to monetize comparing to the loss of $59 million, or 2 cents, a year earlier. Facebook had 1.19 billion users during the quarter, up from about 1.15 billion in the second quarter. The number of mobile users jumped 6.7% from the prior period to 874 million.Facebook said revenue in the latest quarter surged 60% to $2.02 billion, exceeding the average analysts’ projection for $1.91 billion. Sales from mobile ads are responsible for around 49% of total ad revenue.

Facebook shares gained more than 78% since social site CEO Zuckerberg implemented his strategy for intensive mobile advertising and tools for making it more convenient for marketers to post their content. Operating margin under GAAP increased by 7% which is another proof that company is experiencing a boost in profitability on each ad.

Shares are expected to be among todays movers after the US stock market opens at 9:30 EDT. The current consensus among 43 polled investment analysts posted on CNN Money is to buy stock in Facebook Inc. The 37 analysts offering 12-month price forecasts for Facebook Inc have a median target of 53.00, with a high estimate of 63.00 and a low estimate of 36.00 according to the site. The median estimate represents a 8.14% lift-up from the last price of 49.01.