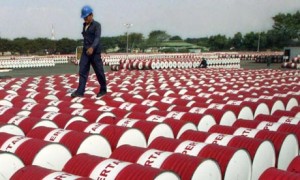 Oil prices continued to edge lower on Monday after the Energy Information Administration reported that U.S. crude oil inventories rose by 4.0 million barrels in the week ended October 11, reaching the highest level in three months at 374.5 million barrels. Analysts surveyed by Bloomberg expected a 3 million gain. Refineries utilization rose to 86.2% from 86% in the week ended October 4, defying projections for a drop to 85.5%. U.S. crude imports averaged 8.0 million barrels per day, down 39 000 bpd from a week earlier.

Inventories at Cushing, Oklahoma, the biggest U.S. storage hub and delivery point for NYMEX-traded contracts rose by 366 000 barrels to 33 million, the first increase since July.

Also fanning negative sentiment, a report by the National Association of Realtors showed on Monday that U.S. existing home sales fell by 1.9% to an annual rate of 5.29 million units, while prices rose at the slowest pace in five months. This was another sign that the high mortgage rates have begun to slow down the housing market recovery. Augusts reading received a downward revision to 5.39 homes resold from initially estimated at 5.48 million. Economists surveyed by Reuters expected a 2.9% fall to 5.3 million units sold.

The oil market however drew support on broad expectations that the Federal Reserve will delay trimming its monetary stimulus program until 2014. A senior Federal Reserve official said on Monday that it will be tough for the central bank to take a decision to start scaling back its bond purchases in December, given the lost output during the 16-day government shutdown and the revisit of the same issues in February.

Chicago Fed President Charles Evans said for CNBC: “October is a tough one. December? I think we need a couple of good labor reports and evidence of increasing growth, GDP growth. It is probably going to take a few months to sort that one out. It is very difficult to feel confident in December given that were going to repeat part of what just took place in Washington.”