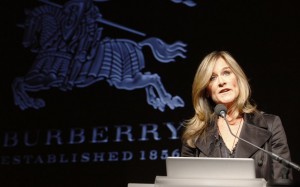 Apple hired Burberry Chief Executive Angela Anhrendts as a senior vice president of retail and online stores. The seasoned-industry executive credited with turning around the Burberry brand, should fill a big gap in the Cupertino, California-based tech giants retail operations.

The luxury goods group’s chief creative officer, Christopher Bailey will be promoted as new CEO when Ms Ahrendts leaves in mid-2014. Some analysts raised concern about Mr Bailey’s appointment, given that he had no experience of running a business and would be combining the chief executive role with that of creative director.

However, Carol Fairweather, finance director, defended the appointment. However, Burberry shares fell as much as 5% in early London trading.

“[Christopher Bailey] has been at Burberry for 12 years. Nobody knows it better than him. It’s a design-led business, with a creative leader at the helm. He also has an incredibly sharp commercial mind,” she said.

Ms Ahrendts joined Burberry in 2006 and has directed its expansion into China and other emerging markets.

Her move to Apple follows the appointment of John Browett last year as head of Apple’s retail operations. Mr Browett was previously working for Dixons, the electrical retailer, but stepped down abruptly after just six months in the job.

“It has been an honor to have partnered with Sir John Peace [Burberry chairman] and Christopher for the last eight years,” said Ms Ahrendts.

Apple is now expanding its role to include responsibility for online store sales as well. By recruiting Ms. Ahrendts, Apple could gain from her years of experience in luxury retail.

Since Ahrendts joined Burberry on July 1 2006, the value of the company has more than tripled. In the last five years, the luxury retailer company’s shares have risen 461% compared with an average 59.5% gain in the FTSE 100.

“I am profoundly honored to join Apple in this newly created position next year, and very much look forward to working with the global teams to further enrich the consumer experience on and offline,” Ms. Ahrendts said.

Apple and Burberry have been in close relation before. Burberry used Apple’s new iPhone 5s in a promotional partnership to capture its spring/summer 2014 collection. Ms Ahrendts also has long been an enthusiastic user of Apple products such as iPads within Burberry.